(image from The Pittsburgh Cultural Trust)

I first started thinking about this a few days ago when in the midst of my very-long depression article, because I probably watched the trailer for the documentary Won’t You Be My Neighbor? four or five times that morning.

It’s not playing in my neck of the woods (yet). It’s probably the only movie I’ve wanted to see all year and I wouldn’t mind driving 50 miles to do so. One theater in the entire Houston metro area playing this movie? Gah! I’ll try to see it as soon as I find out where it’s playing, and if it’s coming some place closer to me without excessive parking fees.

The trailer helped me remember things I’d read about the man, like his saving PBS when Nixon tried to kill it. There were more things I’d just glimpsed later in life that he stood up for, things that as a kid were maybe on the periphery, but are now of paramount importance. As an adult, I can get an idea the broader ideas he tried to bring to children on their levels of understanding.

I don’t think I was a super-fan or dedicated watcher (my memories are so damned fuzzy), and as I got older and life got a little more hurtful (watching fights and divorce overrides good memories too easily), I thought the show was a bit boring and moved on. I let cynicism and other things take me away from the cheerful world of make-believe.

Which I never should have, because anything close to make-believe was the only place outside school where I felt happy.

I hadn’t thought about Mister Rogers’ Neighborhood in so long. And watching the trailer, remembering the tinny, simple music… I froze and just teared up.

It was like I was there, a small child on the carpet in front of the TV again, hearing that voice and seeing those silly puppets. I don’t remember all the lessons he wanted to teach us kids, I just remember feeling like I was spending a lot of time with a wise, loving family member who wanted to talk to me about a bad day I had and give me a hug.

I do know that to me, Mister Rogers was a vocal hug, even if there was glass and cathode rays and antennae and a few thousand miles between us.

And I kept watching the trailer, remembering those feelings. I felt like 20 pounds of anger and depression dropped away from my heart, just listening to him speak again. I could actually breathe.

And I wished like hell he’d never died. They broke the mold with him, and dammit, I honestly think we need him back.

Hell, I’m tearing up just thinking about it AGAIN!

Because what would he say about what we’ve become?

What would Mister Rogers say or do if he was with us today?

I feel like we need him so damned badly.

Now we have bullshit like Spongebob Squarepants for “kids” (characters calling each other stupid, a money-obsessed crab, etc.) PG-rated movies with innuendo for the adults, and R-rated movies saturated with humor geared toward 12 year old boys.

We have “adults” in positions of power who do their damnedest to tear other people down to nothing in order to raise themselves up, consequences be damned.

We are racially, socially, politically, financially divided and don’t even know our neighbors names, let alone our neighbors, most of the time.

We keep kids in the house because of all the “bad people” out there, people usually with kids of their own who shut their kids up because they think you might be one of the “bad people” too. So kids can’t be trusted to go to the neighborhood corner store for milk or ride their bike (if they even have one) up and down the street.

It feels pretty simple, actually–if you get to know your neighbors, who, then, are the strangers?

But then again, when the new normal has adults working round the clock to support their families or take kids to after school activities, and can’t find the time or energy to deal with non-family…how are we supposed to make time to be good neighbors?

We know nothing about each other except what someone wants to post on some message board, blog, Tweet, or profile page.

And as a society, we seem totally okay with that somehow.

Do we even know how anymore? How to get to know somebody, have compassion for somebody else, care for those who are different from us?

What would Mister Rogers say or do if he was here in 2018?

And what would we WANT Mister Rogers to think about America today?

I have a feeling there’s a tremendous disconnect between what he taught and what he’d see.

The Floor is Open… 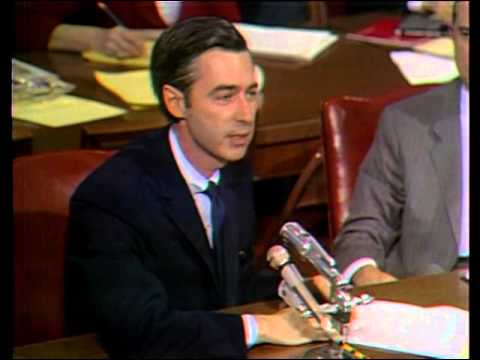 Fred Rogers before the subcommittee in congress regarding PBS funding, May 1969.