DISCLAIMER: If you’re sitting in a theater right now, you may want to read this when you leave, lest you get the glare of death. Dunno if reading it has the same impact as saying it, but perhaps if you’re super daring, you could test the waters…

I don’t get it. It’s a play. Why not some other play, if there’s gonna be a curse?

And why do “theater-people” take it so damned seriously?

At least, it doesn’t make sense to me; then again, I’m new to the being artsy and being a Shakespeare fan thing, anyway.

But Michael Fassbender apparently takes it seriously. So do many other actors, famous and otherwise.

They take it more seriously than people who say, with perfect deadpan delivery, that the moon landings were faked, or that Obama’s not an American, or that Elvis is still alive, etc.

I first heard about this curse during that Blackadder the Third episode where the two actors try to make Prince George more likable to the masses with his bearing and poise. The result: Blackadder saying “Macbeth” every chance he gets (though the resulting curse-remedy’s funnier than I’ve read about).

I wondered about the curse and why some might consider Macbeth to be cursed, and this post from Napa Valley Shakespeare has some great short-and sweet rational points to bring about.

I can see how daring it could be from a historical perspective, the witchcraft elements, murder, and the rest.

But that was 400 years ago–why does it still hold sway now?

Apparently, the deaths and suspicious incidents have piled up in the past few centuries.

Still, I can’t take it seriously as an actual curse, like every mummy’s curse that’s been laughed away or rationalized in some (mostly) tangible fashion. 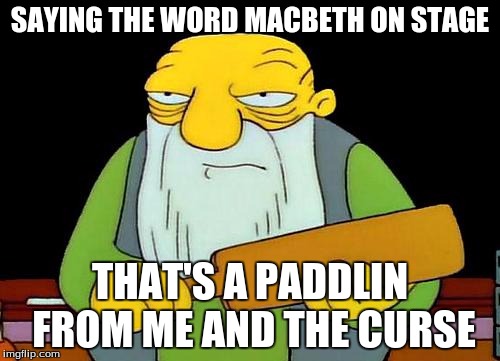 …But I haven’t been in a theater in a long time. And I would like to go some day again as an audience member, and perhaps be good enough to be on the stage as a performer…

Great, now I’m taking it seriously too… just in case.

Any other insights? Anybody an actor/musician/performer who takes it seriously (or doesn’t)? Love to learn more.

And it gives me an excuse to watch Stephen Colbert doing it over and over with exasperation (in the first half anyway). After all, he was talking about the freaking movie with one of the actors to plug it–how else was he supposed to do it?:

2 thoughts on “#071–What’s with that whole “can’t say Macbeth in the theater” curse-thing?”