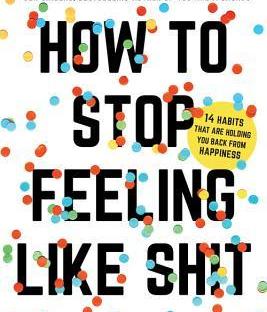 I can’t remember the last time I read a non-fiction book that felt like I wasn’t reading a book. I felt like I was talking to an honest girlfriend (and I don’t mean the cursing bit; I curse a helluva lot more than my girlfriends, dammit).

For the record, I’ve steered clear of buying self-help books with curse words in the title, except for this one. Something about the swear-happy nature of them just felt like a rude gimmick, like the book-browsing version of “click-bait” (and I feel like I hear enough rude gimmicks over the “news” as it is, thanks to a certain White House occupant, but that’s another story).

This time I looked beyond the title, and had to make a choice between which books I could afford to bring home regarding happiness and habits. I chose this one, and I’m glad I did.

How to Stop Feeling Like Shit (the asterisk is tiresome to type) isn’t mean-spirited and meant to belittle you into making changes. However, its direct approach to problems women face (mostly) means it doesn’t spend 300 pages repeating itself when about 180 would do nicely. The chapters are short and there are little ideas and exercises to try, but the book is not built around them. This is not a seminar in book form, but many chapters have ideas of things you can do to tackle this particular issue…things to keep in mind.

The chapter breakdown works well, giving all its wisdom in manageable chunks and making it easy to reference if there’s a particular habit you need to work on or keep in mind more than others. I will likely refer to some chapters several times (and retype and work with the questions at the end of each–I am big on making my own worksheets. It’s the teacher in me, I suppose.).

And yes, there is plenty of swearing. But it feels like natural swearing from a 21st century woman (who is not around her kids), not like stupid R-rated action movies where they have to drop the word “fuck” or “shit” into every third or fourth word of dialogue.

How to Stop Feeling Like Shit gives advice and help on a variety of habits women get into when it comes to, well…feeling like shit, even if we don’t want to. Advice revolves around the “inner critic,” isolating, numbing out, comparisons, self-sabotage, impostor syndrome, people-pleasing, perfectionism, being tough, controlling, catastrophizing, blaming, cynicism, overachieving, and figuring out your values.

Yes, another book that touches on values. Strange how I picked up two in the same week to read (the other was Quiet the Rage, reviewed a few days ago).

I will revisit this wise friend when I can and keep the information in mind. I recommend this book to anybody who needs to just figure out where they’re going and what they really want, because some of what we think is good for us is having a negative, opposite effect. I like the presentation, and the honesty of it.

And cursing doesn’t bother me, but if it bothers you, well, I’ll be surprised if you read it at all.

I’m keeping it shelf-worthy, loanable to anybody I think could use a boost if they so desire.