I have the rare distinction of being probably the only mid-30 something woman who hasn’t been bothered about “when are you going to get married and have kids?” I was certain by now everybody would be in my business about this, as that’s how things seem to work in the real world. Bbut being not-very close to most people– including my immediate family– I suppose the discussion’s never really been there.

I might’ve heard a small, odd-comment from my mom a few years ago (or perhaps I was reading into it because my much younger cousin just had her first child), but I don’t recall her actually bringing up the idea of me having kids. I don’t know if this is necessarily a good or bad thing that I haven’t had this discussion with her. It just feels strange, because isn’t that one of those common mother-daughter moments that’s supposed to crop up at some point?

I have a feeling the following conversation would reveal far too much for either of us to be comfortable with.

The more cynical part of me wonders if she’s not brought it up because she realized she never should’ve had a kid and just didn’t want to admit it (at least, it sure feels that way). And maybe that’s why she’s never talked about me meeting people, getting married, or having kids, even when we were talking more.

Strange. It’s like those who know me best have given up on me ever dating or having kids already, so they don’t bother.

But this doesn’t go for everybody, that’s for damned sure.

I’ve heard other women get the “good-natured” questions (which always felt intrusive and more like “grilling”) in my presence. I’ve done my best to stay out of it, and probably succeeded more than I figured. I usually made fun of the freak-outs by family and friends over the whole “your biological clock is ticking thing.” 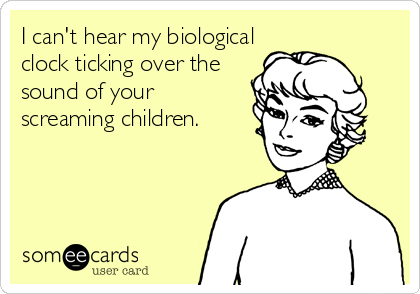 Probably only my sister-by-choice has ever brought it up to me, and that’s because she has 3 of her own. At first, she just didn’t want to be the only one pregnant, but I joked that with 3 her kids can play with each other and she doesn’t need me to give new playmates for ’em.

Then she’d give a mock glare and tell me to shut up.

But more than that, she was concerned that I might be missing out on being a parent. It’s been a few years since she brought it up to discuss. She understands my own issues about the opposite sex, my financial situation, my fears. She knows now that if I ever get blessed with kids, it will be because I feel I’m ready and not a moment sooner.

Also, I brought up the possibility of adopting if I could ever afford it… and felt I had the resources to help a child along in this world. That helped things.

I love my sister-by-choice because she gets it. She thinks I’d be a great mom (I’m more skeptical, naturally), but is not married to the idea that I have to push one out of my body in order for it to matter.

Most other women don’t seem to have that kind of luck.

I’ve been reading some things about women, motherhood, and the medical profession when I stumbled across this TED talk that really brought it all together. My jaw dropped at some of what these DOCTORS were telling this woman, and I’ve read other journals, blogs, and articles that back up the general idea she stresses in this: that there’s something deficient in a woman who doesn’t want a baby.

Well, we have far more complex lives and more choices for how we can live our lives in this country. It only makes sense that we should have more choices as to whether we want our bodies to carry children or not. Right?

Apparently, the medical profession still hasn’t gotten the memo…and society at large still pushes it as a matter of basic evolutionary and cultural norms. I’m not going to go on a total feminist rant, but I do wonder why it is that if a woman wants to undergo treatments or surgery to make her infertile or incapable of procreating, then why the hell does she have to go through every obstacle course to make it happen?

And why would these doctors basically tell them to make it so the man has to have the procedure instead? Wait, it’s her body that would carry a child, can’t she have that decision?

I think there’s something sickening and inherently unfair about the whole thing, for men and women.

And that’s why I don’t join in when people get badgered. Right now, I can’t see myself dating, let alone having kids. And it would be a nightmare to have one now, with my situation in life and my temperament.

But I would want that option…maybe. Being naive, and getting older, the idea of pregnancy scares the shit out of me. (Sometimes reading a lot is more nerve-wracking than mind-expanding.) I haven’t discounted the possibility of wanting kids myself. This is about choices.

And this is why I have a huge wariness of doctors. Why is the medical profession still equating being a woman to being a mother (at some point), as if that’s the only option? That angers the hell out of me, and I hope like hell there are more changes to come down the pipe.

In the meantime, here’s a YouTube link to Christen Reighter’s TED talk:

One thought on “Women, motherhood, and medical choices: an eye-opener.”