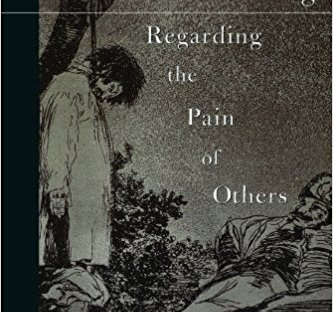 For a thin work, it’s complex as hell. Regarding the Pain of Others is a book for anybody who questions the use of photography in art or media, photography that can show cruelty and violence, and what we’re supposed to take from it in our society.

I’ve bumped into a few books about analyzing photography and imagery, how shots were composed and what it means when it’s real and not a reproduced moment. However, this book has very little about whether images were staged or not, the technical aspects, or otherwise. Rather, it’s about the basic morality that surrounds such images.

For something just over 100 pages, it took me nearly a week to read it. There is so much in it, and some parts that need re-reading several times. It’s not that it’s too complex, but I think it does the writing justice to really think about what Ms. Sontag is bringing up.

Hell, with all these shootings and wars we’ve had, it’s no wonder I had to really soak this book in. It’s a good question with no easy answer, and I think Ms. Sontag was trying to make that the point. She’s written about photography plenty in the past, and this particular book tackles the uses and meanings of photographs, videos, and other media.

I admit, I was most surprised when I read this book that not a single photograph was printed in it to illustrate one of Ms. Sontag’s points. On the other hand, the book really isn’t about the images at all, but about our relationship to them, the messages they send (or could send), and how we relate to the actions captured in the frames.

There are millions of images that this book can speak of, so I think it was a smart decision. And it’s written well enough that I spent time imagining what she was talking about (and remember some of the photos she referenced.)

It talks about the images, but doesn’t need them to sell her point. I think she did well.

I recommend this book to any psychology or sociology student, media student, historian, or researcher, or any layperson who wants to understand how images work on us, and how we work on them.

Definitely a keeper in my non-fiction section.