I forced myself to become human again this morning.

I woke up early as usual, but woke up flustered, worried, and angry.

It wasn’t til mid-morning that I forced myself to become human. I heard dad get up and start his routine, went back to my room to lay down a minute and try to quiet the screaming upset and frustration in my head, cried a little and then decided that it was time to go somewhere–anywhere–today.

I didn’t realize how neglectful a person can be when they’re in the grips of depression, self-loathing and feeling stuck. I showered, and began to think about what I could do today to erase yesterday.

You know those days when you’re at work and every possible thing that can go wrong in a shift actually does? That was yesterday. At least nobody was screaming in my face… that’s probably the only bad thing that didn’t happen.

And then I tried–and failed–to let my anxiety NOT show (or be heard, I’m sure I’ll get griped at about that at some point).

I hung between awake and asleep all night, harping on that awful shift every time I took a break from other activities (which I’ll admit were mostly distractions to drown out the noise). I just couldn’t believe how many things went wrong.

The biggest reason for it, I’m sure, is I work in an office that is split between two companies/services and two agendas (not telling you who for privacy’s sake), so you could say I have multiple loyalties.

I can say that what happened wasn’t really so much my fault. I know that, deep down. It’s just a perfect storm of appointments and services converging at one time, and I couldn’t keep up. We were stretched pretty thin.

I woke up annoyed and angry, and realized that I was close enough to the edge that if somebody’d sniped at me for not getting things done–boss or client–I would’ve exploded.

And that scared me.

That’s one thing I learned from The Disease to Please that I hadn’t quite figured: I have anger in me that I can’t quantify. I think it’s largely anger at myself and my sluggish attempts at changing my life for the better.

But to use the general anger in me to lash out at other people, and if hard pressed I wouldn’t be able to explain why except I’d had enough and needed a pressure valve? There’s no coming back from that, and I’d already had one crappy experience with that anger under my belt. That once was enough.

So, just before showering I’d made up my mind to go get some more coffee–elsewhere. Yeah, I decided I needed a day out though I really can’t afford it. I’m off work today (thank goodness) and have to be prepped for tomorrow. But I wanted to use this place to get my center back, or at least try.

I can’t do anything the easy way. I have to take LOADS of time to try and calm down, to get shit done and enjoy my own noise. That’s why I go to Starbucks all the time. And that’s why I’m here now.

I can’t relax at home. I can’t think at home because of the thousands of little distractions that’ve come out of the woodwork.

And with this anger in me right now, I really can’t deal with dad.

But he was grousing at the TV and in a sour mood, so I just got my box of stuff and said “have fun yelling at the TV” and walked out the door.

I’d rather be out of the house all damned day and night than hear those screaming (or smug) heads. And I’ll probably resort to headphones and my iPod tonight to get those damned dishes in the sink cleaned up and drying.

It was after writing my morning pages, and then about 5 pages in my journal, that I realized my anger was scaring the hell out of me. I still hadn’t written it all out of my system, or cried it out. If I’m lucky, perhaps today, with my coffee and tea, I can find a way to commune with the Universe.

I’ve felt like Peter Gibbons sporadically, but for the past week it’s been a lot like this: 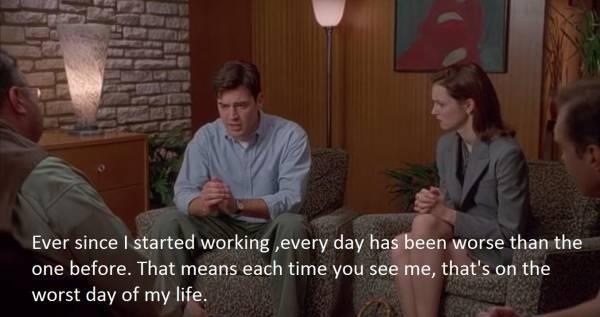 I made a decision when I finished crying–I was going to get a newspaper and start looking at the classified ads. I was going online to research some more about an extra job opportunity I should probably take, then clean my office so I could work from there (and not be ashamed of its look over the webcam). I was going to consider other opportunities in case I just up and quit my current bread-winning job.

I’m too terrified of screwing up and having to sell everything to pay my bills to just quit a job out of the blue. But, as things get more tense and I’m getting condescending vibes from one of my bosses, I’m at the point where something really bad on my end could happen.

Of course, “really bad” could be as little as hurting somebody’s feelings, so that’s a sucky yardstick to go by, but you get the point.

I need something else better than where I am at. When I was crying and asking the universe why the hell I was so scared (and what of), and why I couldn’t seem to change, that’s what popped up in my head: even this “security” of mine’s not going to stay there.

I don’t mind helping people so much, but the way I do it seems contrary to one of my bosses, who’s all about getting things done quickly. I don’t work well hurrying along, and though the phone call clients are what pays our bills, if I get somebody right in front of me with questions or needing a service, I’m going to take care of that person standing right in front of me.

I guess it comes to a difference of opinion as to what my job description is. And it’s only going to get worse.

If I’m being honest, it’s been getting that way for the past month. Dunno why. But I’m just not a salesman and can’t stand pressuring people to give over money. As someone who’s been on the receiving end of a sales pitch like those too many times, I hate the feeling, and I’m sure I’m not the only one.

So, I’m going to find a way to get out. Starting today.

My main goal is to stick around as long as I can until they’ve got enough people trained to cover for me in case I’m sick or need days off (which they’ve been working on for months). But I intend to have something else in the works.

I’m just amazed the clients weren’t all pissed off at me, but I was doing my best to keep them apprised of what was going on. It helps that there’s a big clear sliding window between me and them, and they saw me trying to put out multiple fires at once.

Maybe that’s why nobody was yelling or getting pissy at me.

What struck me this morning, and the big reason for my anxiety and desire to search for a new job, is that I’m sure it wasn’t only the clients that were seeing me the way I was.

I’m sure one of my bosses was, too.

It felt like I was drowning, swamped between all these responsibilities. I was drowning and–at the most–she just blinked and stared at me. Why I have to do acrobatics on the job and keep everybody happy is beyond me.

But really, I don’t think I have to. I just have to convince myself of that.

So, I’m away from one source of my troubles (at least til tomorrow) and another set of troubles (til tonight). I’m looking for a new Universe, one of possibilities that helps me release tension in a positive way… or at least a constructive one.

A cup of coffee to keep me going (til it’s time for tea) and just some time to myself to really really focus. There’s a place in this world for me, a job I can relate to and grow to love.

Something away from a freaking office. Time to open up the classified ads and get researching. Every day I feel like this, and it’s time to knock it off before I really do something drastic to myself: