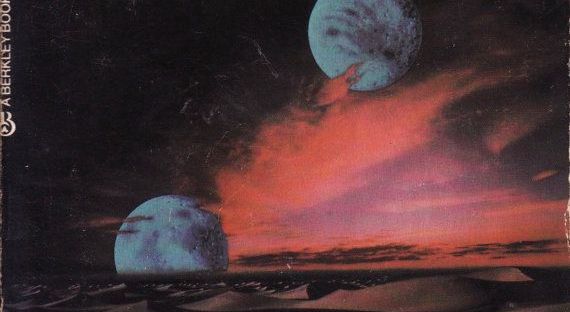 I saw the movie at least two dozen times before I knew there even was a book. Then I saw a classmate reading it in 9th grade. And I went to the first second-hand store I could find to get it. I’ve read the book probably half a dozen times since that day (and seen the movie a couple dozen more).

Dune is a remarkable story, full of imagination. I will be looking forward to finding old interview footage and notes of Frank Herbert, to see others getting the gist of where he was coming from. I haven’t read any of the other Dune novels, and maybe some day I will, but I love this one for sure.

I haven’t read every bit of science fiction by far, but I can see why so many other science fiction writers consider this one a masterpiece. Better yet, it’s an approachable one.

Dune is the nickname for the planet Arrakis. Human beings have spread across much of the known universe by the year 10,191, which is where the events of our story begin. Each group of humans that have settled have worked in their respective planets and made them into different place. Arrakis, being so barren and full of deserts, is considered unsuitable for long term habitation except for the people known as the Fremen who live in the deserts where giant sandworms rule and water is so precious they have to reclaim their bodies water or else perish.

It’s also the only planet that has something called the spice melange, a product of semi-mysterious origins that is essentially a drug or poison that expands consciousness and prolongs life.

Arrakis is the great backdrop to the story of Paul Atreides, the teenage son of Duke Leto, who is to take control of Arrakis after the Emperor has forced the Atreides’ enemies, the Harkonnens, out of their position as rulers. Because of the spice, and the Emperor’s orders, the Atreides go into Arrakis though they know it’s a trap. Paul has been trained by his mother, Jessica, a woman of the Bene Gesserit school of mental and physical training. Mentats are the male equivalent (computers have essentially been outlawed, humans have to become their own computers).

Religion, poison, intellect, and feudal armies rule in this future. This is what helps and hinders the Atreides family as the trap closes, and the plans within plans within plans are revealed. Paul and Jessica have to fight for their lives, and during their early days on Arrakis, Paul begins to suspect that he is the Kwisatz Haderach, or a combination of Mentat and Bene Gesserit who can surpass all known human mental abilities.

Such a person could see many roads to take in the present, and well into the future, and maybe rule the universe…or plunge the universe into war.

I know, I know–lots of name-dropping and unfamiliar terms, but there are a few things in this book to help you out. However, if you just let yourself get absorbed, you can kind of just figure it out as you go along. Sometimes, there are passing references to other events, and there’s a glossary in the back of the book to help you with the terms.

This is a startling adventure, a science fiction book that didn’t nullify religion but expanded on the possibilities. With our world today, one may actually recognize some words the Fremen use as words derived from modern day Arabic terms. Considering it’s a desert planet we’re talking about, perhaps it’s not that far-fetched.

I think the universe of the story is an amazing read, and I have a feeling I’ll delve deeper…eventually. Worth the read and several re-readings.

3 thoughts on “Dune, by Frank Herbert”