I’m asking for it, I know–posting a religious question on a Sunday of all days, but when the question won’t go away, it just won’t. The whole “prosperity gospel” thing’s been stewing in my mind for weeks (and years) and I finally just had to do some digging.

Well, I’ve had the same opinion about the prosperity gospel for some time. It’s my mother’s preference for all the preachers that tend to fit under this umbrella that kind of turned me off of Christianity. I haven’t been to church in decades, and part of me wouldn’t want to try. I’d only go if I was certain that the church fit me as a first timer, and I wouldn’t want to step foot in a prosperity gospel church again.

Now, what stirred the pot for me thinking about this again was browsing the internet and being bored: I stumbled on a lengthy bit from Last Week with John Oliver about televangelists from a few years ago. When the winter storm hit and my internet access was sketchy, I did some deeper digging, watching mini-documentaries and reading exposes.

And I felt sick. I had a hard time even listening to these preachers for a few minutes (about as sick as I get listening to a Dump diatribe). I wouldn’t want a penny of mine going to any of these churches. Not when I see how these preachers live, and some of the material about how they treat people who gave them money to be healed and it never happened.

Well, they weren’t really focusing on me anyway–I didn’t have money to send, but you get the point.

Now, being a lapsed Christian, I don’t have a ton of scripture memorized that I could sling out into the Ether and then sit back, smugly thinking I’ve proven my point. That ground has been picked apart by people far more knowledgeable than I, and I recommend a look through. So many things about biblical interpretation bother me, but that’s an argument for another day.

It bothers me as a historian, as a reversion to a kind of belief system I thought we’d all been disgusted with. This prosperity gospel, where if you send in your money, your seed, to God, it will grow and make you prosperous. But it’s not a $5 contribution, they’re talking $1,000.

What about people who have a hard time making their car note, or putting gas in their cars, or have to take the bus because they can’t fix their car? I don’t know anybody with $1,000 lying around (and when I had it, it went straight to income taxes last year–and I’m trying to rebuild that emergency fund to pay this year and keep saving). That money ends up going straight to health issues or car issues or whatever.

Where does the prosperity gospel leave people who can’t donate the amounts these “preachers” indicate needs to be donated? It smacks of the old teachings in Europe when “The divine right of kings” was the norm. It was a cultural system that preached obedience to the rulers because they were ordained by God to be in their position…and as a bonus, you’re a weakling peasant because something’s wrong with you.

Never mind that 99% of these rulers won the genetic lottery and were pushed out the rightly-connected birth canal in the right time. Never mind the intrigues, the gluttony, murder, lust, and the ability to starve your people because you want a few hundred more acres of hunting land and the peasant risks death if they kill a deer in plain sight to feed their family. 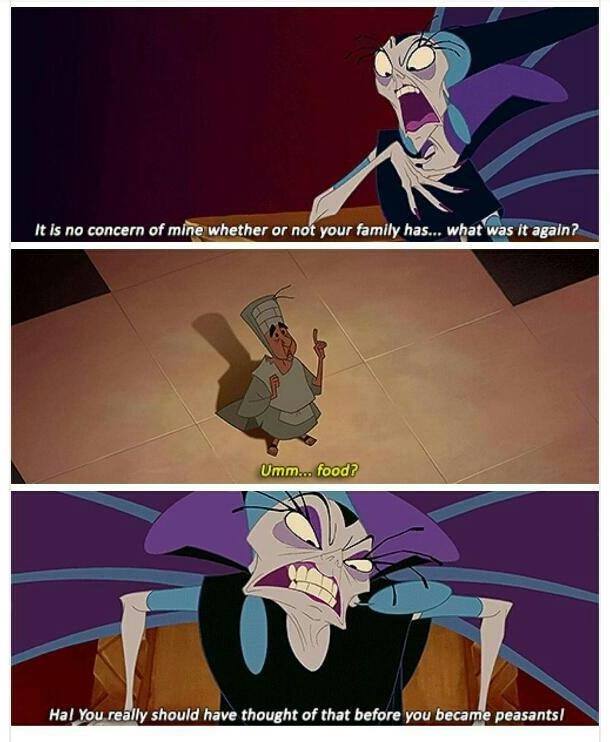 from The Emperor’s New Groove

That’s what this prosperity gospel brings to mind for me: if you’ve got the money, you’ll be in favor with God. If you don’t, well, then you’re shit out of luck and probably a horrible sinner or not a believer anyway.

That “divine right” thing is the first thing that got me thinking. I also tried to remember (and looked back at a few things) that Jesus was talking about. Joel Osteen is the most obvious one about not really going along with the Bible as most would think.

I cringe when I see Joel Osteen smiling all the time. He reminds me of the oiliest used car salesman on the lot. And it’s a plastic smile like I’ve mentioned before. But I digress…

Joel Osteen gets a lot of criticism because he rarely–or never–preaches about sin, demons, or Hell. I know I’d tune out a preacher with a constant “sinner, fire and brimstone” mentality. But the Bible is full of the bitter and the sweet, and I have been uncomfortable with this cherry-picking of the supposedly-revered Word. Osteen focuses on positive thought and action bringing you wealth and health. Hell, every book he writes touches on the key to positive, happy, successful, faith-based living (usually all 4 at once).

I admit, it doesn’t sound so bad, really, except he’s leaving out big chunks of what the Bible is actually saying Christians need to do to be saved, or whatever else it is we’re supposed to aim for (again, lapsed Christian here). I’d like to believe in the power of positive thinking myself, and have been working toward it.

The problem is he’s packaging new-agey thought and older, positive thinking beliefs and structures into Christianity and passing it off as Christianity. I don’t believe the Bible is the only book worth reading, but if it’s supposed to be the basis of your belief system, why are you barely using it?

I forgot what it all is, but if you’re interested, here’s one of the videos I watched that helped me figure out what was bothering me so badly (it’s a nearly 2-hour documentary from the Reformed Apologists):

For myself, I say that I don’t believe quite all they’re saying in this video about the process of salvation and what it takes. I would like to think being positive and treating other people well counts for something. I actually agree with Joel about probably only one thing: that God will know what’s in our hearts.

Maybe that’s just wishful thinking because I’m learning how to live myself, but so far I’m okay with working on that. I want to be a better person so I can live with a good heart and do good works for others who need it.

However, I totally agree with the video’s premise that this is not what the Bible is teaching, and therefore Joel Osteen is misrepresenting the Bible when he’s not teaching that Jesus is the way to salvation. I feel like he’s trying Christianity on as an acceptable fashion and twisting it around to get his new-agey messages out to more and more people.

I’ll say it again: I believe that being a good person with a good heart very important (and I’m working damned hard to be that way), but if you are a “Christian” preacher and aren’t even using Jesus’ words–especially the darker stuff–then you can’t call yourself a Christian preacher. Many things are attributed to Jesus. If you’re job is to enlighten people as to who he was and get people to follow Jesus, then you need to use ALL of it!

This “seed faith” stuff smacks too much of trying to buy your way into heaven, too. Uh, wasn’t there a Protestant Reformation partly because of the “Selling of Indulgences” thing? That’s one of the few things we were told to remember about the Church split for tests anyway. Okay, so that was about praying people out of Purgatory more than anything, but that’s only half-a step removed from what I can see today.

John Oliver used a snippet of this short-documentary Suffer the Children (2007) in his monologue, and I’ve got the video here. The filmmaker makes that point, too, and the disdain, excuse-making, obliviousness by church leaders or helpers makes me cringe when hearing these stories and seeing some of the footage.

It makes me wonder how people can believe in anything anymore, let alone these people. And when I see that snippet of Kenneth Copeland, yelling at the camera from a plushy chair in the yard of his plushy estate, about how someone can be broke in a “a trillion-dollar economy,” I just want to punch him in the face. I don’t know if it’s convenient ignorance or obliviousness.

I have no problem with the preachers like the mild-mannered one in the small church with palsy. I am like John Oliver in that I believe churches can have a great impact–and a beneficial one–when they help the poor and the hungry as Jesus did.

Frankly, even as a 12 or 13 year old (when I’m sure I started losing my faith), I couldn’t figure out why God needed greenbacks. God is God, in charge of the whole freaking universe and more, so why does he/she/it require physical money?

I figured out God doesn’t. When it comes to that one preacher John Oliver had footage of, the one talking about people being envious because he was able to buy two airplanes–cash…apparently even he knew God didn’t need it.

And all these people were clapping for him.

That’s what bothers me the most. Millions of dollars in homes, jewelry, planes, cars, toys, trips, etc. Other than for a photo-op, how many of these people spend time feeding the hungry or visiting the sick in hospitals to pray with them? With the amount of money they have, they could’ve fed it back into the community. Now, some of them do minister and stuff outside the church, or rather, get their followers to volunteer the time to do so at homeless shelters and hospitals. But honestly, with that much money, you can afford to be human, I’d think.

And besides, don’t “actions speak louder than words?” Your “Christian” example should shine in the way you are. “What Would Jesus Do?” was a catchy fashion statement and question, but I haven’t heard anybody legitimately ask it in a while. I’ve heard silence unless it was “Send your money to ___.”

Oh, and don’t get me started on “faith healing.” That’s also a rant for another day. I don’t know how I got on the Copeland’s newsletter mailing list, but I’m sure it was mom and I just chuck that newsletter in the trash every time.

So, how are we doing our best to live well and get into Heaven if we’re focused on accumulating earthly wealth and comforts? I thought that was the opposite of what we were supposed to focus on if we were good Christians. But maybe I was being taught the Bible wrongly as a kid… 5 thoughts on “#053–Does God prefer cash, check or credit card?: or, why the prosperity gospel bugs the hell out of me.”