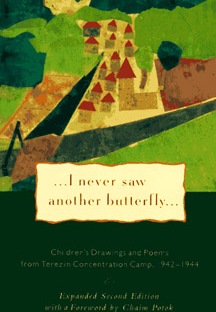 I’ve had this book for a couple of years now and have read through it several times. I can’t help it. When I read it, it shows me so much, and I just let myself absorb what I’m seeing and reading. But this time I went cover to cover, and found more info than I had before when I was distracted or doing a short read to learn or pass the time.

I Never Saw Another Butterfly is a book of poetry and artwork made by Jewish children in the “ghetto” of Terezin, Czechoslovakia (Theresienstadt, the more common name). This particular camp stood out because it was selected to be a “model camp” to fool the Red Cross and any other international visitors that may come calling. The camp held many children for a number of years, and many artists, writers, and intellectuals.

And when the inspection was over, they were all deported to Auschwitz. No children younger than 14 survived.

The book contains just a fraction of the saved artwork of the children in the camp, who used what little supplies had been smuggled in or hoarded by a few teachers. Even with such minimal materials, they’re interesting to look at.

And then there’s the poetry.

Now, many of the works are unable to be credited and are listed as “anonymous” or “unknown,” so we can’t tell the ages of those artists. But there are quite a few poems by 10 and 12 year-old kids, and I’m amazed at how well written they are for the age. On the other hand, the circumstances probably aged them enough. And school was all they had to try to keep themselves together in the circumstances…secret though it was.

I said I gave this book a deeper read this time, because I hadn’t read all the notes at the end before yesterday. I did it because I was a bit of a coward. I knew the statistics, and didn’t want to find out how many of these children perished in Auschwitz. The work that’s creditable is noted with a materials listing (like in an art gallery), and a mini-biography where possible.

It hurt a bit to see a child’s work, done with careful attention and minimal resources, or a poem about determination and life moving onward, and then to read that they may have perished in Auschwitz.

This is a book for any age, and a good way to introduce younger readers to poetry, art, the Holocaust. The works within are all made by teens or younger, and I think that’s helpful for them to relate to. Adults can take a lot from this book as well, seeing the cruelty of the world through a child’s eyes. It’s a short read, but worth the time to absorb. The poem “The Butterfly” in these pages also inspired The Butterfly Project that started at the Holocaust Museum Houston (a book about that artwork reviewed previously).

People wonder why I became a volunteer at the Holocaust Museum when I was in town, since it’s “so depressing” and “you’re not Jewish, are you?”

Well, this book is my response. I’ve bought a few copies just to help somebody answer those questions. When innocent children can be killed just because they belong to a family, religion, or ethnic group…it’s senseless, cruel, and needs to stop.

Addendum: While looking for publication info, I found out that much of what’s in this book and in the State Jewish Museum in Prague (which loaned out some of its collection to the D.C. museum) was put into a play of the same name. I don’t think I’d ever heard of it being performed, but it looks pretty engrossing from some of the photos I’ve been able to find.