Maybe it’s the “December Dumps” that have been hitting me hard, or it’s the crazy work schedule that’s made me lose sight of the things I’m trying to work toward. All I know is when I picked this book up Christmas Eve and started to read, I have to say it was damned good timing.

Man’s Search for Meaning is an enlightening work–smartly written by a man who was a psychologist from Vienna–and a Jew–and therefore was sent to the concentration camps. Part psychological treatise, part autobiography, all memoir. Dr. Frankl’s work, published shortly after the war, is about the ways the mind does what it can to make survival possible, or to expose the shortcomings of human experience.

Man’s Search for Meaning is a uniquely written memoir. The language sounds clinical and detached, and there is no concise timeline to work with (not a single date that I can remember). The book is rather about points of discussion regarding “logotherapy” (which I’d never heard of before) and which he became a major proponent of.

Frankl starts sections in Part I with this bit of psychological study and then elaborates with experiences in the camps, whether his own or inmates that have confided in him. One thing became clearer to him: the mind-body connection was strong in the camps, and it surprised him how sometimes the more robust of body didn’t last as long as the weaker prisoners with strong minds and an eye toward the future.

It gives great insight into how some human beings could survive being dehumanized to such an extent, and the different strengths humans have to keep them alive.

I think this book is incredibly relevant, even today. How does one hang on when the world is changing so much? When everything seems meaningless–or we feel meaningless–how the hell do we live?

We all know someone who needs a leg-up in the world, a mental boost or a different mindset to make life bearable or to heal. Man’s Search For Meaning is like a basic primer to help with that, especially in Part II where Dr. Frankl goes into more detail about “logotherapy” itself and ways he put it into practice after the war.

The book is worth a re-read, and I discovered some things I should probably focus on more regarding my own life and depression and such. I’ll probably pick it up again in a few weeks, and this time with a highlighter and pen for notes.

Part history, part psychology, all relevant…I think this one’s worth a look. 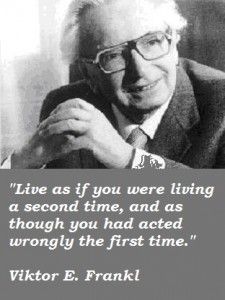 3 thoughts on “Man’s Search for Meaning, by Viktor E. Frankl”