I can’t explain my fascination with shipwrecks. All I know is probably every other time mom took me to the public library, I’d end up taking this one home. When I found it on eBay–decades later–I couldn’t believe my luck.

Probably some of the best memories of my childhood returned to me when I held this book again.

A book on shipwrecks, of all things. I guess you could either consider me a morbid little shit back then or a budding history buff with a preference for true stories.

Anyhoo, Great Shipwrecks of the 20th Century is likely out of print, but not terribly hard to find on eBay or other used book sites (at least, I’ve found it in a few places). It was published in the late 1980s and has plenty of photos and illustrations to go with the subject matter. This is not a book of diving for wrecks or anything like that. It’s a book about the ships at least up to the mid 1980s.

The chapters are organized by decade, and the initial pages for each may seem a bit dry, with a recitation of passenger ships that’ve been lost, how big they were, where, and how. But some of the ships and stories that really stand out in the decade are nicely elaborated. It’s not comprehensive by a long-stretch and focuses largely on Western shipping lines, but there is still plenty to read. I can tell that other books on ocean disasters have picked through this as a resource.

I found it funny that one ship, the Eastland, was probably the least known disaster…even in Chicago, where it ranked as the largest loss of life event in the city’s history at that point. Mr. Bonsall’s questions and research actually led to the Chicago Historical Society commemorating the location.

And the ill-fated launch of the Principessa Iolanda…funny in its own way, but the photos look creepy as they go on, too. 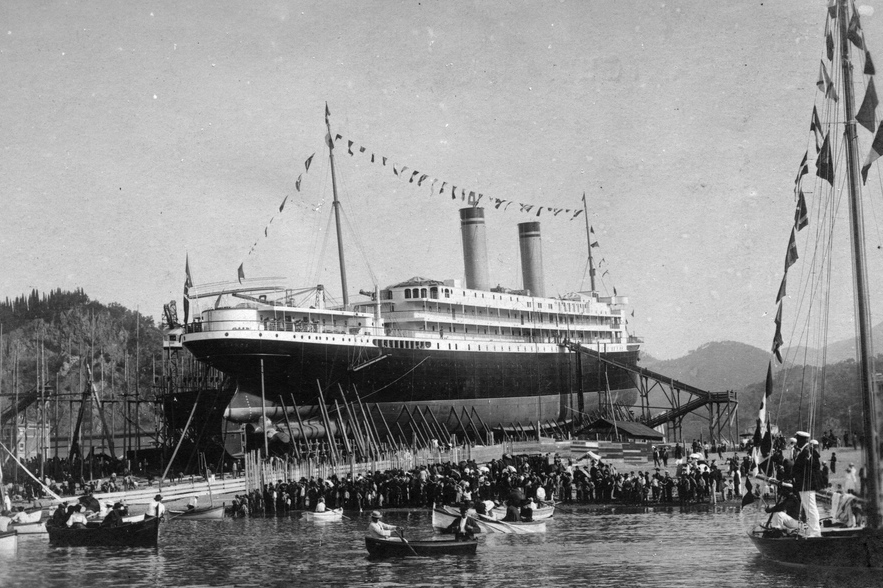 An auspicious beginning for the Principessa Iolanda’s launch…but it won’t stay that way (shudder).

Maybe that’s why I liked the book so much–it educated me and scared the crap out of me at the same time. They’re just pictures, but I remember having difficulty touching anything other than the corners of the full-page spread photos of the wreck sites.

Hell, I still cringe when I have to flip the pages of the Andrea Doria. Something about that famous black and white photo from the news plane passing by: the black sea and stern about to slip under it… it gives me the shivers and I still can’t touch the page.

But I never said I was normal.

I’d recommend Great Shipwrecks of the 20th Century for any navy, engineering, ship or shipwreck enthusiast. It’s got some basic info to work with and springboard into other research, some great original photos and advertising of the ships in their service days, and lots of names most haven’t heard of.

Over the past few decades, some of the ships have been discovered and re-discovered (and we still have plenty of shipwrecks, so it is out of date), but it’s a good, inexpensive addition to any library.