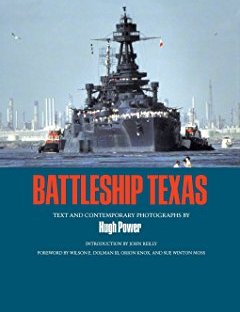 A lifelong-resident of the Houston metro area, I am one of thousands of schoolchildren who has made what I like to call the “4th grade pilgrimage” to the San Jacinto Battleground, famous as the shortest decisive battle in history. Most people know about the monument (which wasn’t supposed to be taller than the Washington Monument, but it’s Texas, ya know), but unless you’re there, most people aren’t aware of the big blue steel ship hugging the ship channel in its own slip.

That ship is BB-35, the Battleship Texas, and easily a highlight of any great local attraction tour. I first saw her during my own “4th grade pilgrimage,” just after she returned from her 1988-1990 dry docking, but didn’t see nearly as much as what this book shows.

Also I was about 9, so I didn’t care much about history, or the fact that it was the only surviving U.S. battleship that was in both world wars. I grew into that fascination later; it was just awesome to see (and most kids’ favorite field trip in elementary school).

Looking at this book is like revisiting that time when everything was new (or re-new thanks to renovation).

Battleship Texas is a great book by Hugh Power, published in the early 1990s. The book is divided between the development of and operational history of the ship, naval photos of the ship at sea and of some life aboard, and what I call a photo-tour of the ship. This would be a massively expensive book if they included pictures of everything, but there are some great images of the ship after restoration in 1990.

There is much that’s changed in the area since the publication, so if you’ve gone to the battleground and seen it, you might be a bit surprised. However, there are areas that cannot be accessed by the general public, or mechanisms that aren’t familiar to those who were not in the navy. This book contains a great deal of information on all of it.

Battleship Texas is a great basic resource for American naval dreadnought-type ship development, and a general history of the ship. If you are interested in the navy, military technology, WW2, or are planning a trip to see her, I recommend Battleship Texas to thumb through. It’s not that hard a text to find, there are plenty used on e-bay and some full-price on normal bookseller sites.

Since I’m a navy nut at heart, I suppose I’m a bit biased, but oh well.

Happy reading and have fun should you ever visit the ship in La Porte, Texas (and thank the maintenance crew if you can–they work hard to repair her and keep her alive for future generations).