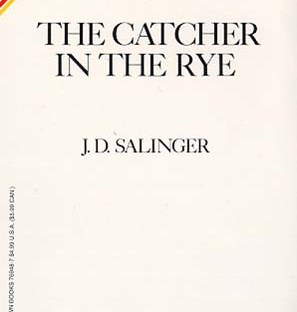 I admit right now: I didn’t finish it. This one’s been sitting on my shelf for a decade. I suppose I should’ve read it the day I bought it, then I may have liked it better. I’ve heard from people who have read this book long before I did that the best ages to read it are late teens to early 20s (especially if male).

Well, I can’t turn back the clock to see what kind of review I would’ve given it then.

Anyhoo, The Catcher in the Rye is going to the donate pile. I tried to get into this story, and did at first. I’ll give props to Mr. Salinger for one thing with this book–the narration style is so different compared to anything else I’d read. It’s fresh and hooks you in, making you wonder what this kid is thinking, and how he relates to his roommates and thinks about his expulsion from yet another exclusive school.

Part of me wanted to know more about him, about why Holden Caulfield is so listless and generally rebellious. It felt like insight into a teenager’s mind, with abrupt changes in thought process and conversation and all. I remember those days, and I’m used to seeing it.

But a larger part of me rolled my eyes–he’s a teenager who thinks he knows everything, and spends the whole book calling people phonies or morons, trying to hook up and have sex with phonies or morons, and then wanting to run away from all the phonies and morons. He’s a rich kid who didn’t even try to apply himself to school and had no direction.

If he was looking for direction, looking for something better for himself, then I might’ve gotten more invested. It felt more like he was content to smoke, get laid, and waste time.

It actually felt like the type of stuff I was told to AVOID writing at all costs when I read my writing books. The same reasons why every grunt and sigh we do doesn’t make it into dialogue in movies. Yet, all those “smaller moments” that wouldn’t get any play even in the most minimalist film got published in book form.

That’s what it felt like to try and read it.

As time went on, I actually started getting listless and just wanted to end the book, and started flipping pages to get there. It took a bit to realize I was doing that–and I’d stop and try to go back. Halfway through, I said “screw it,” and dropped it in the donate box. I couldn’t keep going (or try to) anymore.

I’m a listless and odd person myself, but my inner-teacher is pissed off at this kid for not taking advantage of the possibilities he has. I’m not saying he should’ve just sucked it up and become the kind of schmuck he doesn’t want to be, but he could just get through school. Holden reminds me too much of the teenagers who exasperate me to death, the ones who just coast, fail, don’t care. Yeah, school isn’t all fun and games–even if you love learning–but I just wanted to shake this kid, tell him that if he didn’t want to be stuck with all these phonies forever, then he needed to just do his best in school and get the hell out of there.

That’s one thing teens in each generation never seem to get–just do your best, graduate, go your own way, and you never have to see these people you despise ever again if you don’t want to! (P.S.–that wake-up call does work some of the time).

I found it a little odd that he insisted he didn’t really care about school or what others thought of him, but he never told the truth about people he interacted with. He never told them if he despised them or anything like that, and even writes his roommate’s  composition for him when he begs instead of telling the lazy ass to do it himself. So much for his honesty, I guess.

Part of me wonders (because I just couldn’t stick with the book) if he didn’t realize he was just as much a phony (or in danger of becoming one) as those around him who he couldn’t stop calling morons.

Maybe if I was a lot younger and hadn’t read as many books, I could understand and get this character. But after a while, and a lot of books, some characters just don’t hold up as well to the others as the pool is diversified. I like the writing style, but I can’t get behind the character. My inner teacher is too in the way (but then again, I wasn’t much different in high school, so maybe this book never would’ve been one I could enjoy).

7 thoughts on “The Catcher in the Rye, by J.D. Salinger”