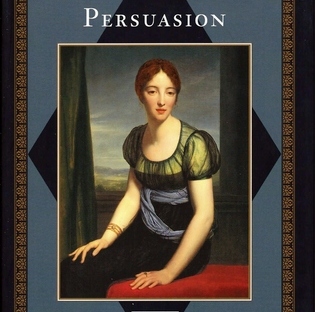 I like Jane Austen a lot. I like her characters and her command of language. I do get lost in it once and a while, but I can find my way back through a bit of careful re-reading. That said, I’m surprised that it took me about three tries to finally read this book. I’d get through 1 or 2 chapters and something would come up.

I didn’t think I’d like Anne Elliot all that much, but as I let the story unfold and got to learn more about the people around her, I grew to admire her restraint.

Frankly, I’d want to bash her father, Sir Walter, and sisters, Elizabeth and Mary, upside the head for their vanity and the clueless bubbles they lived in. But that wouldn’t be proper, would it? Wouldn’t be very “Austen-esque” of me.

And the more I got to thinking about Sir Walter, the more I had to restrain laughter because his self-importance got to reminding me a little too much about a certain person in our government today.

Persuasion is about Anne Elliot and her family. Anne was engaged to a young man who was going into the navy, Frederick Wentworth, many years before. Family friend Lady Russell, (concerned over their social position and his lack of status) persuaded her to call it off. As the story picks up, we learn that the family is in debt due to Sir Walter’s spendthrift ways and his vanity. Their family is titled, old, distinguished and he has to be given a reality check that their finances are running out if they don’t stop. They relocate to Bath and rent out the estate to an admiral and his wife, which brings many naval men into their lives at different times, especially now-Captain Frederick Wentworth. And Anne’s move to Bath is postponed, so she’ll be meeting many interesting people.

Persuasion is thinner than most of Austen’s other books, but still has a lot going for it. There’s much to be said about old vs. new money, titled men vs. commoners, the 18th vs. 19th centuries, and onward. Anne is a great observer, and Sir Walter’s vanity and disdain for anyone “unattractive” or “not titled” gets in the way of his seeing truth, especially when an heir to the title comes along full of flattery and secrets (Mr. William Elliot). To Sir Walter, and many of the nobility Austen poked fun at in her later works, a broke aristocrat was still worth more than the richest merchant invited into the upper classes.

I thought the character diversity was fantastic, though I did get confused a few times when reading. Several characters share the same name, and though propriety and mannerisms have changed, when you have two characters named Charles and more of the Elliot family coming into the story, I had to sit back and remind myself who these people were that we were talking about right then. And it took me a bit that they were making a difference between Mr. Elliot and Sir Walter (Anne’s father). I just had to try to remember because Sir Walter (grr!) name-drops “Elliot” every chance he gets!

And though the character diversity made for a more interesting story, full of events and great conversation, I felt it distracted quite a bit. I never got a good bead on Captain Wentworth, because he and Anne really didn’t get a chance to speak much. Circumstances seem to bring Anne and Frederick together for a moment, and then other characters get in the way. So, their story goes along kind of slowly at first.

As events unfold, especially Anne’s reunion with schoolmate Mrs. Smith, and Mr. Elliot’s comings and goings, then the story really gets moving and we get more out of both Anne and Capt. Wentworth.

I suppose the pacing is just a bit odd to me, but I hadn’t read Austen in a long time. But once I set aside distractions and put my “Austen glasses” on again, I could get into the story easier. I like this one and am going to keep it. Anne’s become one of my favorite characters.