Out of curiosity, I took the Briggs-Myers personality test a few months ago. They were right when they said the results might be eerie…they called me a “moderator” type (at least some of my fave actors, scientists, and writers have the same type–makes me feel a bit better).

I felt like yes, okay, it’s just an indicator, not a road-map or fortune-telling tool. But it’s strange because that label is what I’ve felt like since I was a kid–but more of a people-pleaser than a moderator as we understand it.

I have an unfortunate tendency to say “yes” to helping people out or doing something, even when I’m swamped with something or am dog tired and would like a day or moment off. When I’m sick and can’t make it in, I first start my phone call with a string of apologies and the promise to make it up later. If I’m 1 minute late (the less than handful of times it’s happened), I’m mortified and can’t stop apologizing or explaining what happened (while a co-worker 10 minutes late, consistently, won’t say a word).

I don’t know why that is, or where it came from, but it drives me crazy…and I’m sure it’s not better for others.

I drive myself crazy the most because I never learned how to say “no” to people and “yes” to myself. Somehow I went through most of my life not realizing that was an option.

I’ve been at everybody’s beck and call the past few months, wearing myself out to help them (and yes, to get a bigger paycheck while the hours were there), but I genuinely needed to rest and recover, too. Working for months on end in pain and bouncing around all over town for jobs has gotten to be too much.

I have to learn to say no more often.

I don’t mind being considered reliable, and like that I can be trusted to come in when someone else can’t make it (provided I don’t already have plans or appointments I can’t cancel).

But it gets tiring. Sometimes I feel like “reliable” is just a polite corporate word for “doormat.” 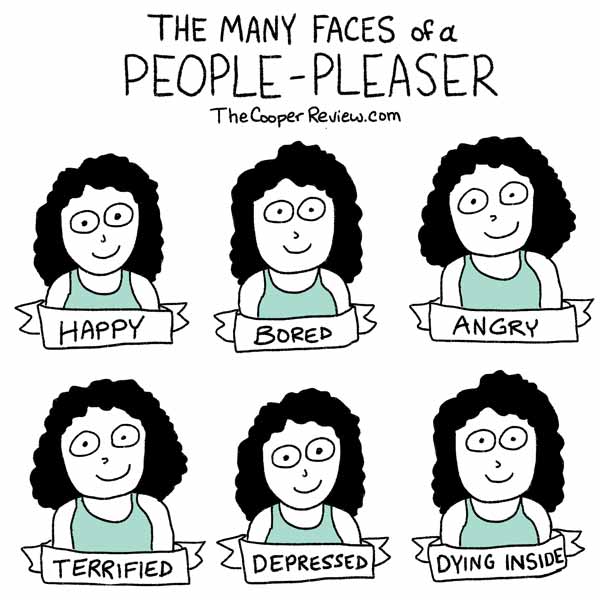 You hit it TheCooperReview.com. This is the most accurate thing I’ve seen all week…. This is me (but with better hair)!

People know I need the hours, so they’ll impose on me at the last minute and ask me to come in. I don’t like others being in the lurch, though, so I end up going.

I need to learn to say “no” when I am at the end of my tether and need a day of rest, instead of reflexively saying “ok” and going in, mentally beat to hell, but still going through the motions.

I think one of my bosses is seeing my strain and just putting me on the clock all the time instead of changing my schedule over and over again. That’s nice of her. Especially now that I’m training people and have to try not to screw that up.

I put the most pressure on myself because I never learned to say “no.” I can’t recall when I learned to just say “yes” to everybody else–was I taught as a kid to be helpful and jump to it? Did I try it out later as a way to be relevant and make friends (I sure turned that on its head in high school, so I dunno if that’s it).

And do I do it because I’m terrified of losing hours at my jobs because I’m no longer “reliable” if I don’t?

I’ve been around people who can just quit a job at the drop of a hat and go looking as if it’s nothing. I’ve NEVER had that experience. The idea of quitting without a backup plan or job or two already in the pocket terrifies me (I only did that once, but started looking for a job a month before I actually handed in my resignation just in case–and got an interview by my official last day–whew!).

I think that’s my biggest fear–no longer being useful because I can’t say “yes” when they need me to.

But I still need to learn to say “no.”

Many of my interpersonal problems occur because I can’t say “no,” or I say it far too late and end up going out with people I’d rather avoid just because I didn’t want to hurt their feelings (and who cares if I’m uncomfortable as hell?). I am a doormat, a pushover, and I’m sure the people around me know it.

I don’t make a fuss for myself, but I’ll do it for others. For my own health and sanity, I need to stop it. Even if saying “no” feels damned selfish and I should be ashamed.

But why? Others can say no and think nothing of it afterward.

I really wish I remembered more about my upbringing, then maybe I’d have a better idea how I got to this point–was it friends, school, family?

Well, there are some ideas out there that I’m working on (I’m starting to think PsychCentral is full of psychics, because they’re hitting most of my concerns in this one article. First of all, unless it’s an actual emergency, I don’t want to be at work. I will say “no” if I genuinely have something else to do (and if I don’t, I’ll bring my boredom bag and work on stuff offsite to make it worth my gas).

That’s the beauty of working near a coffee shop–gives me a good excuse to stop in. But I want to be prepared to make the most of my day offsite. If I ask off, dammit, I will say “no” and not relent. If they cancel my Friday morning shift on a Monday, then change their minds Thursday night, I need to learn to say “no.”

If they want me to work, they should’ve kept me…that is, unless somebody’s bad sick and nobody else is available.

Days off away from work can be refreshing–it’s time for me to say “no” to work so I can expand my mind and let them be the breaks they are supposed to be.

And make it stick. Remember my reliable/doormat theory? People know if they put more pressure on me or keep asking, they can wear me down because I will feel guilty (the main reason I had problems with certain former co-workers, dammit). Then I end up saying “yes” (very reluctantly) while they walk away with what they want.

“No” has to stick. I’m reading some great tips on how to do that here.

I have to toughen up so people stop asking me for things. I need time for me. I haven’t written any of my stories in nearly a year (holy crap, has it been that long?) because I’ve been at everyone else’s beck and call.

I need time away from jobs and job concerns that I’m working on in my freaking sleep so I can dream and do more for myself.

It will be an awesome revelation if it starts with “no.” A real, genuine, stuck-to, no.

3 thoughts on “Learning to say “no” for your health”