I’ve seen the movies (the amazing 1930s version and the “meh” version with “John Boy”), so I already knew the story for the most part. All Quiet on the Western Front is a great piece of work, though, and the style works wonderfully. I started it this Armistice Day/Veteran’s Day morning and couldn’t put it down.

All Quiet on the Western Front, written by German WWI veteran Erich Maria Remarque, follows the point of view of narrator Paul Baumer, who was only 18 when he enlisted in the army with his classmates. However, the first of the book drops you into the middle of life during the war, with a timeline that moves you back and forth with his experiences and memories–but tastefully.

There aren’t any overused, abrupt flashback scenes that take you out of things. If Paul remembers something about the past, it’s because it’s there with him in the present. It flows very well, and there’s some dispassion in some descriptions with remarkable vividness in others.

For 296 pages (my copy), it went rather fast. I just couldn’t put it down. I wanted to know what was going to happen next, what philosophic ideas would come into Paul’s mind, the experiences he and his comrades would have. There is much here for a reader to take with them, and I wanted to know what happened to them.

This book doesn’t flinch from violence or gloss over it, and Paul is matter-of-fact in the telling. You feel like he’s seen these events so often they don’t shock him much if at all. The narration feels very much like a day-in-the life of a soldier, and how disconnected he is from anyone he meets that isn’t a comrade in his unit. I felt worse for him when he got leave to go home than when he was in the trenches, the lack of understanding from family and neighbors as to the reality Paul faced in war…and how hard it was for him to try and spare others pain.

I can see why this is considered one of the best war books of all time. I certainly felt that when reading it (though there are many I haven’t yet). I can only imagine the many fiction and creative nonfiction books the style influenced. I bet writer Robert Heinlein absorbed it before penning Starship Troopers (the writing rhythm and descriptions of war have some similarities).

I’d recommend this to anyone up for a war book, fiction or otherwise. There’s such a simple-yet-complicated story in these pages. It’s the right book for the day today, especially since WWI led to the birth of Amistice Day/Veteran’s Day. 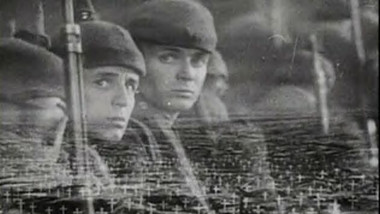 Somber still shot from All Quiet on the Western Front (1930)

Insightful reading ahead. And thank you vets for your service.

One thought on “All Quiet on the Western Front, by Erich Maria Remarque”