I am so sick of this crap.

I’m sick of these killings.

I’m sick of these “woe is me” stories of a guy who can’t hack it and says “screw the world, I’m taking you all down with me.”

I’m tired of white men (NOT BOYS, DAMMIT!) who haven’t figured out that sitting on your ass and being a white male isn’t going to get you very far anymore, be it job related or dating related.

And I’m really sick of the media and government not calling it like it is. I’m tired of them not calling these white male shooters “terrorists.”

I think its a simple formula: if your object is to maim or kill complete strangers that mean nothing to you and have never personally wronged you, because of some supposed belief you hold (whether nurtured, cultural, religious, etc.) and you find a way to kill as many people as possible and do it, you’re a freaking terrorist.

I don’t give a damn if you are white, black, brown, yellow, whatever. If you intend to scare the hell out of people and create chaos or grief for your own satisfaction, you’re a freaking terrorist.

Yes, the church shootings near San Antonio have hit me hard, namely in how they’re not hitting me as hard as they used to. I fear most of us are heading toward empathy burnout (here’s a great blog post talking about it). The first thing I know I checked out was if the terrorist was white.

I’m fucking calling him that from now on, and I don’t care if the media doesn’t agree, dammit.

I was waiting for them to refer to this man as a terrorist.

If my admittedly-very-rushed research is right, the last mass-killing that led to a white male being called a terrorist in the US was in April 1995, and his name was Timothy McVeigh. He parked a truck outside a federal building and blew the hell out of it killing over a hundred people.

Is it the body count that leads one to be called a terrorist? Or a foreign ideology?

I’ve read several articles asking why we don’t call these white “lone gunmen” terrorists. They’ve been asking this question for years, but there is no good answer.

I want that answer. I want some asshole from the government and the mainstream media to up and admit the truth.

They don’t call them terrorists because they are white.

Zenobia Jeffries wrote a spectacular short article about the Vegas killer and how we depict mass killers in the media. I think she’s spot on.

Anthea Butler wrote another great one after Roof executed (I don’t think that’s too strong a word) those people at the AME Church. Butler asked why white males who commit these atrocities are described as “mentally ill” or “kids” (even if they’re in their 20s). Yet if the perpetrators were Black, Muslim, Hispanic, etc., they’d be considered “thugs” or “gang members” or “terrrorists.”

Go ahead and read ’em–I’ll wait.

This double standard has got to stop.

One way I agree with my family is the belief that the gangsters, gang members and all are terrorists. The rationale is they make the streets unsafe, intimidate, steal, kill, and innocents get caught in their little wars. They push their agendas to hurt others regardless of the cost.

That’s a form of terrorism. My theory is the only reason the media doesn’t call it that is it’s most often “minority-on-minority” violence and considered acceptable (to a degree) in our racist society.

A person brandishing a weapon/bomb screaming about dying a martyr and killing to ensure his/her own heroic end before blowing a bus or building to kingdom come with innocents inside.

Too simple? Dunno–they sure dropped the ball with Dylann Roof, didn’t they?

An angry white man with weapons who methodically picks out the location, time, and date where he’s going to find lots of people to kill, and the he proceeds to open fire until he’s killed or out of ammo.

A white man who fills himself with hate every day, can’t get along with anyone, and blames the world for his problems, then goes to kill random strangers that represent who he blames for his misfortune?

Okay, some people might waffle at the idea of calling some of these white men terrorists because of the lack of political reasons. A basic dictionary definition of a terrorist is:

“a person who uses unlawful violence and intimidation, especially against civilians, in the pursuit of political aims”

Okay, that works. Now, let’s backtrack and get a couple basic definitions of “political“:

Hmm…that’s a pretty extensive field of info to work from.

Most of these lone white terrorists may have a hackneyed reason for doing what they’re doing. It’s not that they are insane, it’s that they have some sick worldview (or political viewpoint they ascribe to) and take it to a concluding action most people wouldn’t.

The distance between ideology and political thought is minuscule. How often are “terrorists” called out as terrorists because of their ideology?

Let’s face it–politics permeates everything these days, which is what’s made this year a fantastic nightmare most thinking, empathetic people can’t wake up from. People form their own ideology and live according to it (or try to live according to it).

What’s the ideology of a white lone shooter terrorist? There isn’t one they all ascribe to, it’s on a case by case basis.

How many of them seem to have little place in the wider world? Can’t relate to other people? Lack empathy? Read and view information that reinforces their already-narrow worldview? Blame their own failures on groups of people they barely associate with, whether racial, sexual, ethnic, etc.? Blame all society’s ills on “those people” (whoever the hell they are)?

How different is that mindset from that of what the media calls terrorists?

How many of those terrorists are closed off? Can’t related to those around them? Lack empathy or desire to understand others? Reading and viewing information that only validates and reinforces their prejudices?…

You get the idea.

So, other than the color of their skin, why aren’t we calling angry white male shooters who mow down a bunch of people they don’t even know “terrorists”?

I’d love to know that answer. 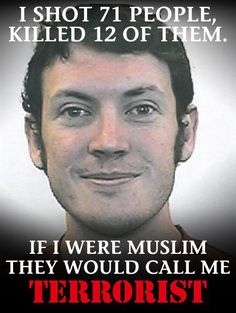 The Aurora, CO shooter. Fuck his name, I don’t care.