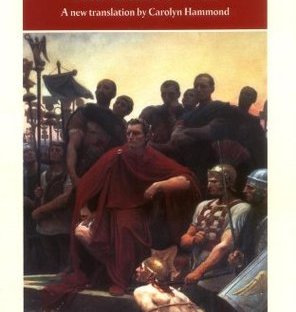 Two things made me pick up this book again after 15 years. The first was listening to Dan Carlin’s latest Hardcore History episode called “The Celtic Holocaust.” I actually have the same translation he used for his notes. And I really think it’s funny that when I started re-reading this book, most of the passages I’d highlighted were ones Dan Carlin quoted in his podcast. Stranger and stranger.

The second was knowing that I hadn’t picked it up in 15 years, and now, maybe it was about time I re-familiarized myself with Caesar and his own words.

The Gallic War is one of the first books I bought with my own money when I was very curious about Roman history, only to ultimately read it for geography research paper. I don’t know how I stumbled on the idea of writing about the Romans and the Germanic tribes, but I did and this book was very useful for the culture-clash elements, the diplomacy, and the map I made for extra credit.

The Gallic War comprises the seven “book” commentaries written by Julius Caesar himself and the 8th book written by an underling of his named Aulus Hirtius. It’s not that long a read, and the paragraphs are numbered (which is good for research purposes). But it has so much put into it.

The Gallic War covers Caesar’s remembrances of his campaigns into the north and northwestern parts of Europe just inside and outside Roman control, from about 58-51 BC. It’s chock-full of interesting information, and though we can maybe fault the text for some bias (considering the source and all), it is actually still a useful text.

I admit, I tend to balk at using autobiographical texts from this far back in history, but it has so much useful information, and is told by a man who admits to mistakes on the battlefield (at least, in some minor fashion he does). It’s not pages and pages of “me, me, me” (which I hate), but gives a good picture of what the peoples were like in the areas he traveled to, who lived there and their relationships to other tribes.

It’s a great window into history, and I doubt I could count the number of books, even into the 21st century, that would still use this book as factual source material. Not many other texts on these topics have survived with a minimum of sneering and criticism. That’s very telling and I’m glad I still had this book on my shelf to look through.

Julius Caesar was not a great military commander exactly, and perhaps history has been kind to him in this regard. What this book shows, and he admits to in a sense, is knowing how to use his skills as a politician and orator. Supposedly, he was criticized for his plain speech and his tendency toward describing too much.

All the better for us, though.

I recommend this read to anyone who loves ancient history and wants to understand it better, and anyone who wants a window into the mind of Julius Caesar…or course, it’s a filtered window, but still a window. It’s a great piece of early military history, too.

And if you’re wondering about the “Celtic Holocaust” podcast I referenced and what on earth that means, I’d recommend reading The Gallic War…and if you have a few hours, listen to Dan Carlin’s podcast. I think they’re great history-based companions that extend the understanding wonderfully…if you’re big into military history.