Oh heavens, I can see now why this is called the “imcomparable masterwork of the dark fantastic.” It truly is an amazing, scary, suspenseful work by the awesome Ray Bradbury.

I wanted this review up for Halloween night proper, but after reading I suppose it works just as well for a wind-down from Halloween and all it brings up.

Something Wicked This Way Comes is largely about two boys. Will and Jim. The boys were born two minutes apart, one a minute before Halloween and one a minute into Halloween. It’s interesting how Bradbury uses something like to nurture an explanation as to their outlook and approaches to life. Jim is always looking ahead and seems older, Will follows behind and always seems younger, content with his youth.

Their youthful play, understanding of the world, and their friendship is tested with the three a.m. arrival by train of a carnival in a large field near the town. The boys see the setting up, and even enjoy the first evening at the carnival…but soon they see strange things beyond what one would expect in a carnival and freak show. They find people they know obsessing over how their memories or how they look, such as their old teacher Miss Foley and Will’s father, Charles. The obsession lies partly with the mirror hall and a broken-down carousel that the boys are driven away from on the first night.

And when Jim and Will see too much after hours–thanks to Jim’s curiosity–they are convinced they are in danger. Freaks and performers seem to be looking for them over the week, but why? And who would believe what they’d seen?

At first I wasn’t sure if I’d like this book so much, especially with the incredible wordsmithing that felt a bit out of place (very reminiscent of Dandelion Wine, which is another “Green Town” book). But once you get the flow of the words, of the impressions and emotions brought out by the boys and their experiences, then the story really unfolds.

I got sucked in fast and didn’t want to let go until I knew how it would end.

The book is split into three parts, and there is much in each. I liked part two best, once the danger is more apparent and the theories start to fly as to why this carnival would show up in October of all times, and some possible answers as to who the mysterious Mr. Dark and Mr. Cooger really are.

I’d recommend this book to anyone who wants to be impressed by unique, descriptive writing. Or wants a great story that’s sinister and suspenseful with a dose of the child’s eye view of the world thrown in. I really got invested in the characters of Jim and Will, and even Will’s father toward the end. I got frustrated with some of their decisions (and wanted to smack Jim a couple of times).

It felt like when you’re watching a slasher flick where you sit there and yell at the t.v., telling the hero that they shouldn’t be doing what they’re about to do. That happened a few times, but I didn’t yell–I smiled and dove in further. I knew something big was going to happen, and it did.

The resolution is also interesting, and it’s a great way to wrap up Halloween. Now onto far-too-early Christmas themed crap (sigh). Maybe I can dig up some more Thanksgiving or history themed stuff for November to stave off the jolly fat-man’s vibes for another month.

Seriously, Something Wicked This Way Comes is an awesome read. Enjoy!

P.S.–I was unaware that Disney made a movie version in the 80s. I wouldn’t want to see it, though–my imagination’s made a helluva ruckus with the visuals. That Bradbury…I’m going to re-read what he has written about writing soon. He’s just too damned good. 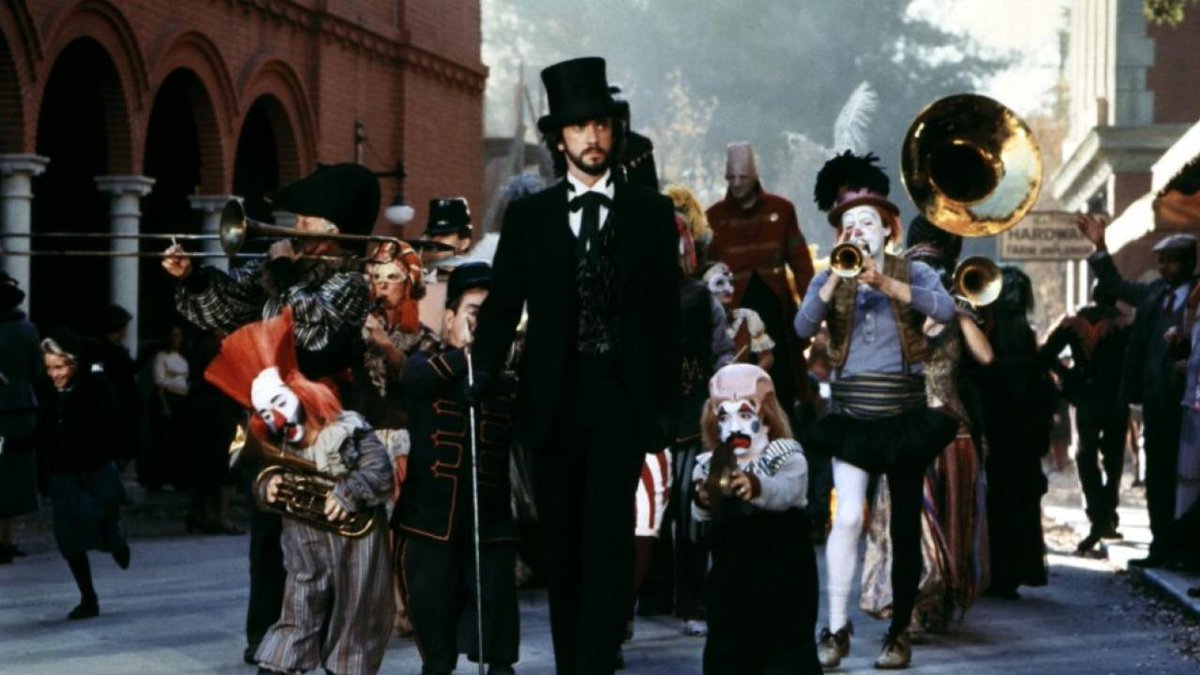 A still from the film, Mr. Dark leading the parade into town…

One thought on “Something Wicked This Way Comes, by Ray Bradbury”