Dunno who Pinned that pic, but I like it. At least that one guy by the open door looks like he’s in a shrugging “what the hell” mood.

I’m not trying to worry myself unnecessarily, but I can’t help it. My own place is several feet above the ground, the ditches are a bit deeper where I’m at, and I’m not going anywhere so I’m not gonna get stalled.

My job, on the other hand, is my most pressing concern. And I need to find some info and calm down before I push myself into a migraine. That’s the last thing I need.

Ike took my internship location (or part of it) back in 2008, and we had delays trying to get things in order. We couldn’t even get back in our original classroom to get things out (or at least I couldn’t) for two months. It looked so weird in there, but they wanted anything that could’ve been moldy out.

Since I was an intern, most of my teaching stuff was still at home–I didn’t lose much of anything except a few exposed papers. I had plastic tubs holding my stuff under the table–just a quick wipe-off the outside with bleach and they were still good (and no longer smelly).

I guess you COULD call that one experience with a natural disaster impacting a job. But it was an unpaid internship and I didn’t have any bills to worry about.

Now, I’m concerned about the only job that’s been giving me a little paycheck the past few months. If that gets flooded out, what’s going to happen next?

Has anybody ever been in the same boat? Did they help you find another temporary job or pay you to transfer to another location for a while? Our nearest affiliates are a long distance away, and I wouldn’t be surprised if they were currently in worse shape, anyway.

I’m concerned because if I can’t work, that means my bills next month aren’t going to get paid, and then what the hell am I going to do?

It never occurred to me that I’d be more worried about my job than my house right now, in the middle of all this. The rain just wouldn’t stop and was a downpour between about 3 and 5 am, but even so, we’re still okay.

I’m scrolling through the Facebook feed right now to see who is trapped, who has evacuated, and who is keeping up the commentary. Several people are stuck at home or at their government jobs who I know (one of them stuck with her dogs and I’m hoping if rescue comes she can take them–they’re all she has). Hugs to her.

All in all, I’m probably the most fortunate of the bunch because of where I’m at, out-county and “middle of the sticks,” basically. Even if I’m stranded, I’m good provided there are no more tornadoes. We cut the trees all around the house for a good distance so none can fall on us and make it worse. I wish I’d had money for waders. The yard’s going to be a sinkhole and fire ants are floating all over trying to sting me every time I gotta step on the grass. 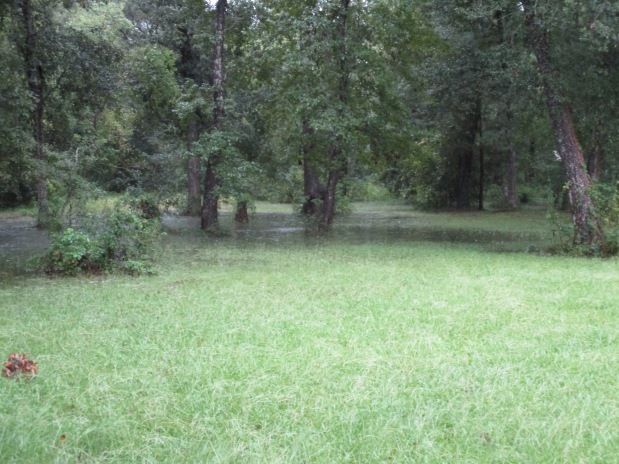 Backyard around 9 a.m., before the downpour started again in earnest.

We’ll probably have to get the foundation inspected and re-leveled once it dries up, but I’m sure dad’s accounted for that one. 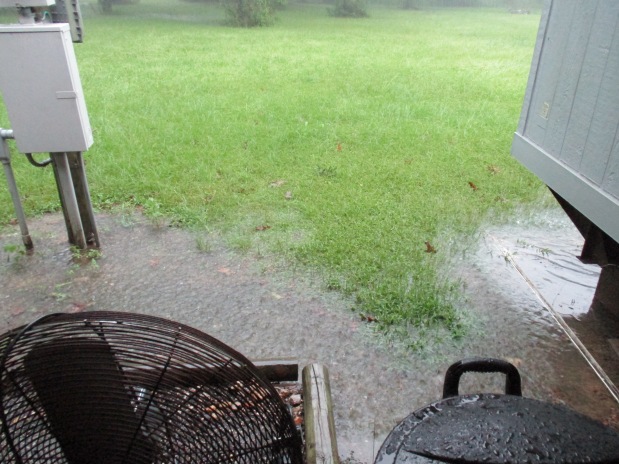 This was from the 26th around 9am, after the first round. Yeah, I bet the whole ground under our place is soaked by now. It’s going to take forever to dry out (and kill the fire ants, dammit).

But again, my job is another story. I don’t know how bad the flooding will get because it’s 25 miles from me and next to the interstate (which is touch and go depending where it is). I’m trying to pull up old flood maps to see how bad it got in previous storms, but no go.

If I can’t pay my bills because my part time job (with no vacation or benefits) has been washed out, then what do I do? I need a plan…one that will start with being in the clean-up crew if they’ll pay me for it.

I’m damn well not afraid of getting dirty and working hard. I just wanna be safe and paid doing it.

Oh boy. I’m really glad I started looking up info on “Plasma donation” this week–I might have to get into that just to scrape something together and move forward.

As long as they are not flooded out too, dammit.

4 thoughts on “#037–What do you do if a natural disaster hits your part-time job?”