I’m a weatherbug. I’m the weirdo with a 35mm camera hoping to get great lightning shots in one click and waste a whole roll of film trying. I wanted to film hurricanes and tornadoes. I watched Twister and wanted to be a storm chaser when I grew up.

I’ve always been waiting for a storm to come. A few have.

Hurricanes were always exciting and a little scary. This one’s not much of an exception. I’ve seen predicted paths of other storms, but when the eye wall gets close to the Texas coast, anything goes. It’s like the coastal edge gives a bitch-slap to the storm and knocks it off course to go staggering…wherever.

I was born just a few weeks after Hurricane Alicia hit in ’83, so nothing but hand-me-down stories of mom “overreacting” and dad “annoyed”.

In 2001, Tropical Storm Allison made me call my boss to say I couldn’t work the next day. She wanted to berate me for using it as an excuse until I mentioned that I was standing in my bedroom with three inches of water and rising.  She just said okay and hung up, and I kept throwing my belongings on the bed and off the floor.

The only other thing I remember that night was how the carpet kept trying to float up under my feet as I walked. At least the carpet was gone when the water rose the second, third, and forth times in those three days. I didn’t realize that the storm had did a loop-de-loop and went right back over us–it didn’t seem possible.

From The National Weather Service

I’ll always remember sleeping in a borrowed camper in the backyard, having to wear shoes back in the house because who knows what ick and filth was all over the tiles, and doing our dishes with a bucket and garden hose for a few months. Cheaper and better situation than some, but I sure got to wondering what a real hurricane was supposed to be like.

It might’ve been fragmenting, but still packed a helluva punch for something NOT a hurricane!

2005 saw Hurricane Rita, just a few weeks after Katrina and the levee breaches in New Orleans. I was living with dad and we had no power for days on end, and a heat wave before and after that made the hurricane a wuss in comparison (thanks, Rita, for sucking all the oxygen out when you left, you lousy bitch). We went to a neighbor’s house to wait out the storm. He had a tractor and helped knock down some trees that threatened to fall over the house or garage, and we helped him with his yard.

Around 11pm, I just lay on the carpet away from everybody. It was itchy and hot, and I was under a window (unwise, I know). I had one ear pressed to the carpet, the other to the air. That wind was something to hear, trying to get in, the tree limbs whipping against each other and the leaves making a constant “sssshhhh” noise (with some wet slaps when they broke loose and smacked the house). Under the carpet, the straps and braces made sounds. The straps hit the metal and I’d hear this pinging and thumping. I could swear it was like a tympani drum.

Wish I was a musician–it would’ve been a great time to try and compose. 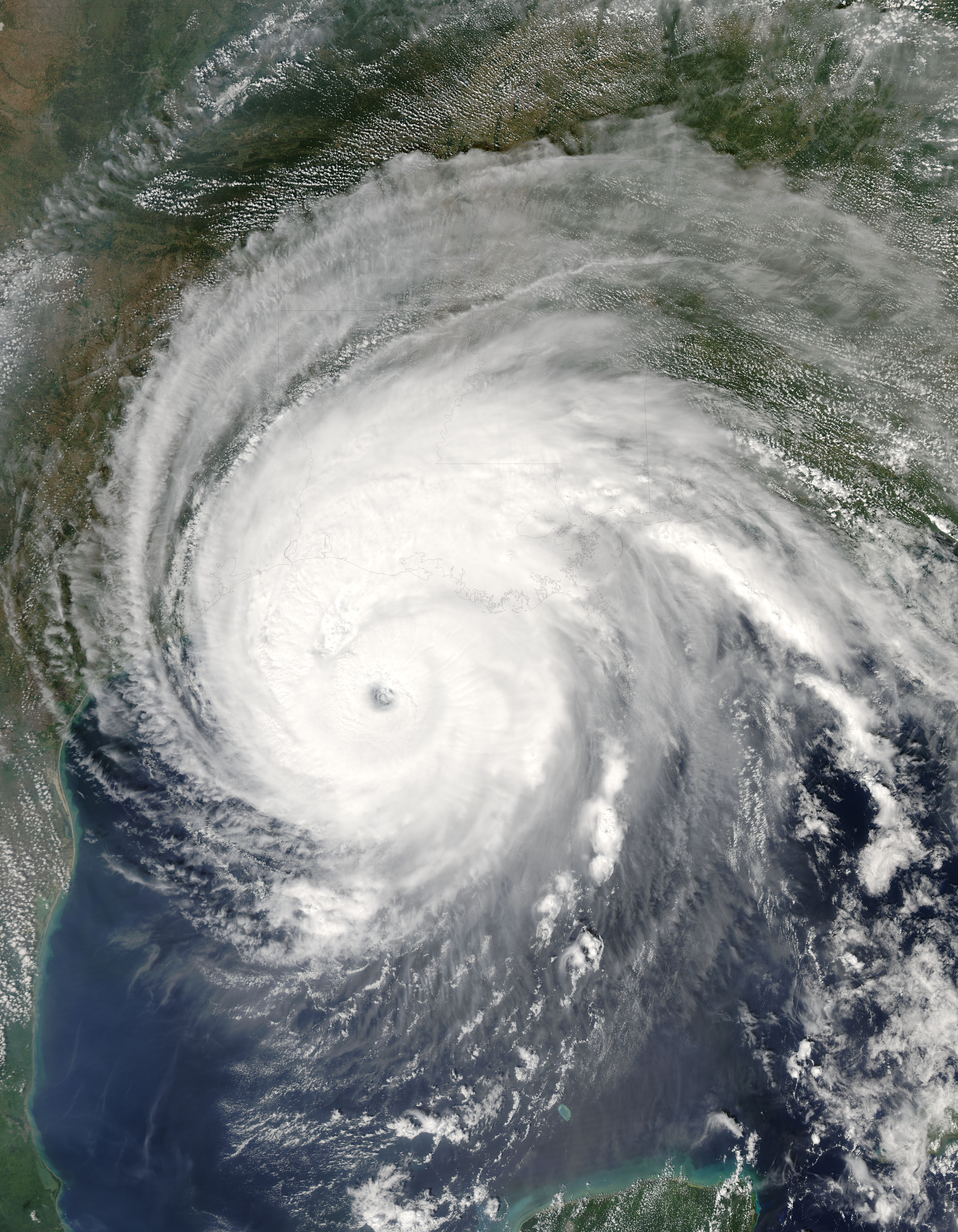 Sheesh, Rita was one tightly-formed storm. I love nasa.gov.

We went home the next morning. Now, my dad hated our mobile home (still does a bit) and said that if we found any damage in the morning, we’d just pick up what was left and move. He kept saying “If there’s one shingle missing, I’m burning it down!”

So, since there was nothing better to do but pick up tree debris, I worked outside a while. I was pulling limbs aside and making piles we could burn when I saw him looking down at the ground, then up at the house, hands on his hips. I don’t think I’d seen him like that before, so I went over.

He was glaring at half a shingle in the grass, which he supposed had been torn off the roof corner by a branch.

I couldn’t help it. “Well, guess you shouldn’t have been so specific, huh?”

I think our neighbors would’ve willingly traded places with us, though. Across the street, the tree behind the house topped itself in the storm and sliced her mobile home practically in half. The only thing that stopped it from being completely severed was flashing that held up the severed trunk–it took weeks to clear the debris and years to patch it up better than new.

At least they weren’t home–they’d left town before the storm came.

And then that HEAT! But more on that later.

2008 brought Hurricane Ike, which was going Galveston’s way, though we were going to get some of the nasty East winds for sure. Oh, heavens, that was a mess. I was doing my internship that year and in the course of half an hour (on the last day before they cancelled school for the evacuations), I went from fine to sneezing, dribbling mess. Somehow I’d gotten badly ill with a cold or the flu, something strange. I don’t remember ever getting sick so suddenly.

So, I had to spend my money on DayQuil, NyQuil, Tylenol and tissues before I got home, which made dad mad because he said I needed to fill my gas tank. Then he saw I was bad sick and said “never mind.”

I guess he would rather have me take care of the illness rather than get him sick or worse.

We stayed home that time. I’ll give props to Ike in that it came after the heat waves, but still it wasn’t comfortable. At least we had a generator that time to theoretically make it easier. Dad rigged it to the garage where we had a small room with an air conditioner to sleep in. I kept waking up thinking somebody was mowing the lawn all night. So I got some ice in a compress bag and a towel, put it against one of my leg arteries, and let it cool me down enough to get some sleep in my own bed.

And now, we’re at Harvey, which as of 10:00 pm local time, the eyewall is about to hit Rockport, roughly 150 miles southwest of where I am now (of course, I suck at mapquest scales, so that’s very approximate).

Now, there’s something that’s annoying or painful about hurricanes when they come here to our little part of the world.

Now, there are a couple of good things I’ll say about hurricanes. Call me a foolish optimist, but there are two trends I notice each time around:

Maybe Harvey will give some more positives to the list, but I’m concerned. the flooding aspect concerns me, not so much for my home–we live on higher ground and I’ve never seen the water get super close to the house before.

No, I’m concerned because of work. I was looking for another job and waiting for word, and I’m sure they had to delay the lease while a Hurricane was bearing down. Makes sense not to sign on the dotted line if you don’t know the building won’t sustain massive damage in the meantime.

And as for my paying jobs…well…I’m concerned that if my current job goes under water, I’m out on my keister for the foreseeable future. I’ve never been really confronted with the possibility.

I’m just going to keep hoping for the best.

Be safe, fellow Texans, and all of us on this weird Third Coast.

And for heaven’s sake, unless you’ve got a Smart car in an inflatable raft, don’t try to go through high water to get where you need to go. 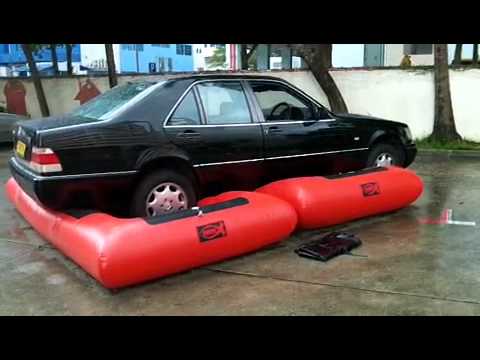 Hmm… wait, somebody tried to invent this? I was kidding… oh boy.

4 thoughts on “I’m Waiting for the Storm to Come: Harvey’s knocking down south… so far.”

Understanding ourselves and the world we live in.