Ah, the summer is ending, Shark Week and it’s equivalents are done by now (unless reruns are around the corner), and SyFy will hopefully slink off into its closet to get its brains bashed out and come up with better stuff.

I thought this was fake when I first heard about it. I mean, Sharknado? I thought when I saw the trailer it was like one of those fake trailers at the beginning of Tropic Thunder.

I guess the great philosopher Scott Adams had it right: “If you build it, they will be dumb.”

Hell, I used to watch Shark Week and Storm Week every year.

But together? Does not compute.

This is one of those ideas that probably started with a dozen people in a room. One of them goes, “We’ve procrastinated for five months. Now it’s 3 am, we’re drunk, and we’ve gotta pitch an idea in four hours so just throw a bunch of words and actors in a hat and pull ’em out one at a time.”

But I have a hard time believing Sharknado came from sober minds. 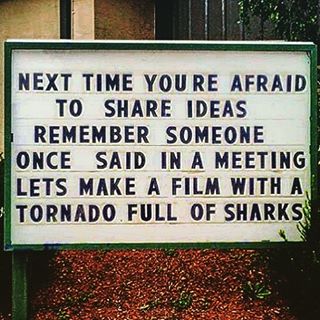 This sign is probably the best inspiration for hard-working writers trying to get published anywhere…or the most depressing reminder imaginable.

That drunken pitch meeting–and the subsequent ones with the studio execs, writers, producers, etc. might explain one film, but how did it keep on going? I mean, there’s nothing redeemable that I can find.

I admit, I never saw a whole Sharknado movie. I tried a few times and couldn’t get past 15 minutes total…I had to rely on internet critics and reviews to fill in the gaps.

And though I enjoyed their insights, I felt so damn bad for them for reviewing these buckets of chum for our sake. Though I have to admit, I think Nostalgia Critic and Cinema Snob hit on something (I love their brainstorming sessions):

I’d rather watch 2012 all the way through without nitpicking the stupidity and CGI.

And I’d almost rather watch Twilight (a part of me just died saying that, I hope you’re happy).

Bottom line–how the hell did this become a moneymaker? How the hell did Sharknado become a franchise? All you need is a storm, some chainsaws, lots of CGI sharks and a different number following the title…oh, and maybe some new CGI locations to desperately try to fool the audience that it’s a totally different movie. 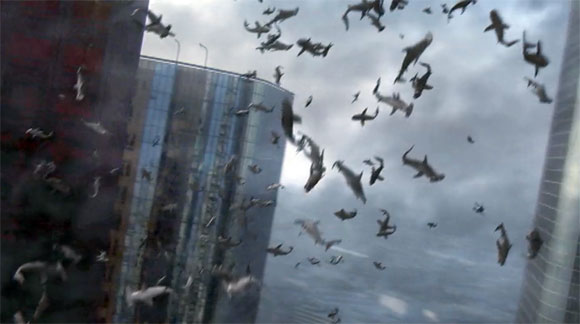 I can’t even get entertained on a “this is so bad its good” level–it looks like something that would win Academy Awards in the world of Idiocracy!

Heaven help us–a film franchise where they didn’t even try their best, and why should they? Like the current news media, they’re making too much money doing their worst to possibly do their best.