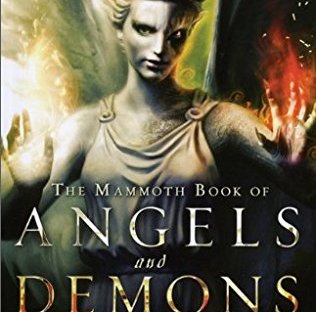 It turns out I miscounted the number of stories. There are only 27, not 28, so this last review of The Mammoth Book of Angels and Demons will have only 6 short stories to review.

This was the most fragmented section I could have read, and I only liked maybe half of the stories. I found the “what if’s” pretty appealing, but otherwise, it’s a hit-or-miss affair with me. Again, not everyone will have the same opinion as I will (I happily admit that), so take it with a grain of salt (personal preference and all)…

“Come to Me,” by Sam Cameron

I liked the premise of this one, if not the whole story. I might not have been in the right place mentally when I read it the first time, and probably missed something, but I’ll make sure to give it another shot. The past two times have been confusing.

However, I do think the “what if?” scenario was good: what if TSA screeners were looking for threats to the U.S. that weren’t bombs, biological weapons, or even human for that matter? What if there was a special group of screeners meant to find something else? Well, one of them is Elsa, who travels around with two others to transportation hubs that require them to keep what they’re doing under wraps.

I won’t say more because it’ll spoil things, and I’m sure you can get more out of it than I could. I’ll re-read this again sometime to see what I’m sure I missed. Interesting premise is worth a shot, though.

“One Saturday Night, With Angel,” by Peter M. Bail

Another story I’m not sure about, a kind of slice-of-life with a store clerk who knows there’s an angel on the roof. It makes people wary and want to stay away for the most part, largely because of the smell, but also because angels tend to swoop down and take people with them, make them vanish without a trace when the sun comes up. It’s a Saturday night with Mike, a regular customer or two, and some young women who come into the store to talk, pretending that everything’s normal (for a world where angels suddenly exist)…until it’s not.

Lots of speculation, and another interesting premise. I probably missed something the first time, but will re-read it again and just get sucked in.

(sorry if I’m being vague–stress and family issues have distracted me and made careful attention to detail a bit difficult, hence my need to re-read ones that didn’t strike me right away).

Okay, now we’ve got one I admit to liking a bit, even if I’m not entirely sure why. I had a feeling what was going to happen partway through, but I think that was the point–and no, I don’t want to spoil it.

The story centers around a fraud, Giuseppe, that’s passing for a Count in France, shunned and shuffled out of most other European countries. He’s a rather sloppy fraud that claims to be able to commune with the darker powers and the higher nobles he meets, many of whom his despises, wants him to show them what he can do. Giuseppe tries to dissuade them, but eventually relents…and it’s interesting why.

I think it was the character and the setup I enjoyed most, especially when the character of Beatrisse comes into play. The story stuck with me when I was done with it because it made me wonder what would happen to these characters. I grew to care for them a little.

In some respects, I liked this one. But otherwise I wasn’t sure what to make of it. Again, may require another reading to see what I missed.

Different, though. An angel on earth is caught breaking the law, despite the “widely known” truth that angels don’t steal. Well, a detective arrests the angel and treats him like he’d treat anyone who broke the law (with a few more threats). Eventually, the angel takes to following him around, wanting to tell him something.

There’s something to be said for this one, but I don’t know what yet. I think the style is enough to make one want to read it. That’s what struck me the most.

“Only Kids are Afraid of the Dark,” by George R.R. Martin

This is the part where you come after me with torches and pitchforks.

I have never read GRRM’s stuff as far as I know (maybe a short story somewhere–I know there’re a few lurking about on my bookshelf), but nope–never read the books. You know–no Game of Thrones series, never even seen it on HBO, never tried to watch it, nothing like that. So I can’t compare this to his other works, though supposedly he wrote it when he was only a teenager.

As best selling as GRRM is, I have to say I couldn’t get into this one. At first I did a bit, at the very beginning, but once we got to introducing the hero of light (I won’t spoil the name for you), then I just couldn’t keep going with it and take it seriously.

But the initial setup is VERY good, lots of atmosphere. I’ll respect it on that basis.

I’m not entirely sure how much I liked this one, but again, the premise was interesting. At first, I had no clue what this was going to be about, but it turns out the narrator, after a crazy night and hanging out with some old smoker, listens to the man’s story of a murder in heaven.

After that, I was hooked: What would a murder mystery in Heaven look like? If an angel dies, why did it happen and how, for that matter? While angels are working on the Universe itself, Raguel, the Vengeance of the Lord, comes into being and is meant to investigate the case.

I got sucked into the world that the old man described, and wanted to make sure I was getting it. I haven’t read much of Mr. Gaiman’s work (maybe a short story or two) before, but I can only imagine his success has to be largely due to the visuals he puts in your head. Well-deserved, if that’s true.

This is the last of the reviews for The Mammoth Book of Angels and Demons.

Verdict: 50/50. Definitely borrow-worthy, though, and for anyone who has an interest in mythology, religion, the supernatural, and just has a few fave authors mentioned in these past 4 posts.

Happy reading to all. I’ll be keeping this one for the ones I loved most (and the others I swore I’d re-read when my head was in a better place).