In the Battle of the Bulge (where I attempt to vanquish the tire around my middle), this is probably the biggest question I could ask myself. My body wants good, healthy food and has no energy because I don’t give it what it wants. That’s mostly because of my “good intention-killing” taste buds.

I’ve written before about fighting fast food and all those fattening items that are keeping me down, making me gain more and more weight while making me hate eating, but I keep doing it anyway. It sucks because now I’m at the point where nothing tastes good.

On the other hand, this might be that crazy break I’ve been praying for.

I wish I liked blueberries in something better than a fattening muffin or Pop Tart.

Do a quick search online about taste buds and you’ll find tons of articles on the science, and I’ve been looking up if there’s a way to reprogram or retrain your taste buds to accept foods that you didn’t want to eat before, or make you want fatty foods and sugary foods less.

I do wonder, is there a good way to do that?

So far, a few of the quick tips in this Reader’s Digest article are worth a try. I like the idea of contrasting flavors, such as if you want something sweet, go after something sour instead. I don’t know what that would do exactly, but maybe it’s a way to tell your taste buds to back off and listen to you for once.

Worth a shot, anyway. I just don’t have much to entertain the palate at home, so to speak, except in my spice rack. Not much a chance recently for fresh fruits and veggies in the house because I was always out and about. But I’m making an effort to do better.

I also found a few articles (that weren’t trying to sell you something) from The Guardian (about flavour flavour learning–yes, it’s spelled right), Scientific American (mostly about teaching children to like different foods, infancy on up), and EatingWell.com (which gives quite a bit on pairings, tips, and turn-offs).

All in all, much of what’s being discussed can be boiled down to this:

Wish I’d thought to look this up sooner. I have a freezer full of frozen veggies just begging me to use them. I like veggies, I don’t mind veggies. I’ll make soup with them if I can (except I still pick out the lima beans when I find them in the mixed veggies bag–I don’t like the aftertaste).

But I suck at cooking vegetables.

Swedish Chef is five-star compared to me… and a better singer to boot, dammit.

When I timed it just right, I could go to the mall to this cheap Chinese food place and get the mixed vegetables: bok choy, broccoli, carrots, cucumber. they were in this whitish stuff that I found out was a bit of cornstarch and white pepper and salt. Well, when I get there at just the right time, the veggies are nice and firm, and the broccoli is warm and crunchy.

But sometimes they’ve been sitting a while and they’re all soggy–and I’m not in the mood to eat them (though I’ll try anyway because I need my veggies).

I’ve never really learned how to use fresh veggies, or how to cook them. Frozen is about all I’ve done, and even then it’s more like stick them as sides to a (rather fattening) main course like hamburger helper, or throw them in to make a cheap soup.

Yes, training taste buds would be a great help…but I’m also beginning to realize that maybe a cooking class would be a great investment. I’m gonna get bored of what veggies and fruits I do have and then revert back to the fattening fast food crap. 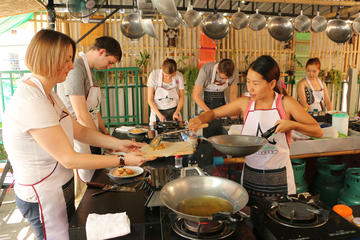 Any instances of taste-bud training that you’ve found to work for you (or your kids)? What about learning how to cook veggies when nobody in your house ever eats them? I just worry about throwing money away because I ruined the meal over and over again.

And I don’t want to stink up the house or burn the place down…or the classroom, if I go that route.

Ah Robin Williams, how I miss you…though you scared me away from the stove when puberty hit thanks to this scene, dammit.

5 thoughts on “#032–Can you train your taste buds to want healthy fruits & veggies instead of processed crap?”