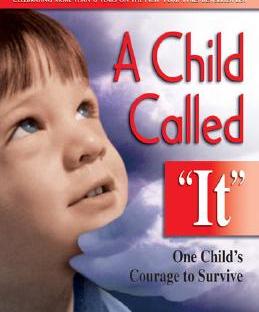 The first time I read this book, I spent most of those two hours curled up on my bed with my left hand over my mouth, eyes wide, with an occasional head-shake of disbelief while my right hand turned the pages.

I didn’t know much about the prevalence of child abuse, let alone “possible” mental illness. What I read felt like some nightmare that this kid just couldn’t wake up from… let alone survive.

Emotionally, it’s a damned difficult read, but it opens up eyes to how secrets are made and kept regarding abuse, and the questions the abused has. I was amazed how much depth there was in such a slim book, and the heartbreak.

I’ve read this book a couple of times because I’m about to tackle the sequels after years of looking at them sitting on my shelves when they weren’t being borrowed from me. I lost count how many people I loaned them out to, but got the same response: clear your head and read ’em.

A Child Called “It” is the memoir of Dave Pelzer when he was a child, from his remembrances of a loving family and mother, to a nightmare that became known as one of the worst child abuse cases in California history. There’s more horror in this memoir than in most horror fiction I’ve ever read. Truth can be damned frightening.

Over the years, this memoir has come under fire as exaggeration and outright lies by family members and some in the media in the 1990’s. I understand family denials–those are as old as time. I understand people’s reluctance to believe Mr. Pelzer’s story and have seen dozens of remarks meant to refute the physical possibility of some of the torturous abuse. But the other detractors need to be reminded of what Mr. Pelzer said in his author’s notes at the beginning.

I believe this is the major key to understanding this work:

This book, the first part of the trilogy, depicts language that was developed from a child’s viewpoint. The tone and vocabulary reflect the age and wisdom of the child at that particular time.

This book is based on the child’s life from ages 4 to 12.

Not riveting to read, sure, but it lets you know the whole book is Dave Pelzer’s childhood through his childhood eyes. That is the important thing to remember.

Mr. Pelzer’s story is so vivid because he’s not taking the time to use his adult memories to fill in the gaps with analysis and life experience. I got annoyed at the “experts” and detractors claiming he couldn’t have survived what happened to him if it actually played out the way he said, so it must have been made up.

That’s why I say that the author’s note above is so important. You can google some of what the detractors have said, like facts about how devastating chlorine gas, ammonia, stab wounds, and freezing water are and how quickly a child would die from them.

But I just took a moment to think about what Dave described, the sensations and the “games.” It’s not like there’s a measuring cup to show how much of what chemical was used (or how much water was used to dilute it) and I doubt there was a thermometer to indicate the water was truly “freezing” point and that’s how he knew. It was freezing to him. He reacted negatively to the behavior while the instigator smiled, laughed, or threatened, knowing it would hurt him and could kill him.

That’s abuse no matter how you want to freaking slice it.

So yes, I believe him, that this is how he felt and with his limited life experience, he was confused and trying to find a logical explanation for the behavior of two selfish drunks (one with some hefty psych problems, I’m sure). There’s a lot of grasping at straws while trying to survive, and I think the point was well made. Other works on abuse are written with an almost clinical detachment at times, but that’s probably because they’re trying to rationalize the behavior or filter the memories through the eyes of a more-experienced adult.

A Child Called “It” is frightening the way a horror movie is when the hero is in the dark, heading right where the killer lies in wait and you yell at the hero to run and not fall for it. The abuse and stabbing was bad enough to read about, but the confusion of this child, the self-blame, turned faces, and lack of help was another. And yet, with all those moments and signs of danger, Dave believed he could find a way to get his mother and family to love him again and it would all go away.

Those parts made me flinch more than the physical brutality.

This book is an exploration of a survivor, trying to understand this new world he is part of.

Yes, it is a hard read. What makes it harder is knowing that even today, thousands of children are being abused, neglected, or murdered by adults they love and should trust. I think this book is a helluva reminder of what it was like in the days before child abuse was talked about, and keeping the Family intact–secrets and all–was essentially sacred. Young Dave’s voice survived to find receptive ears when countless children before him did not.

One thought on “A Child Called “It,” by Dave Pelzer”

How To Command Life