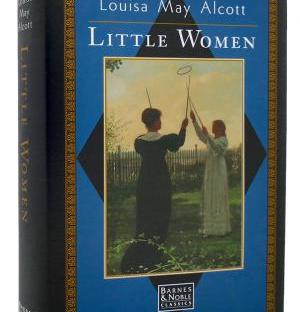 For those who love this book, you will HATE this review. I can’t help that.

I’ve had this book on my shelves since about 2001, and I’ve tried to read it several times before this week, but then I’d be interrupted, have to read something else for class, etc. I left it alone for years.

Now I know why–because I let myself get interrupted.

I was very surprised to discover that I was bored. I quit around page 150, because after reading chapter after chapter, the story didn’t seem to be going very far.

Little Women is a story of four sisters of different temperaments, talents, and dreams and their growing up together (and apart). Now, I have to say the only thing that let me go farther than 100 pages before quitting was the characters. Jo I felt a kinship with because she has a temper and doesn’t feel like she fits in anywhere, wants to be better but her own person as well. I liked her. Then there was Laurie, the neighbor’s boy, and you could tell they’d be fast friends. Interesting how things changed between them over time.

The setup is like a combined serialized work, which I’m sure it was. Each chapter has a small something happen that affects one or all of the girls, then there’s an impression or “moral of the story” element at the end. Little Women feels disjointed, a bit preachy, and like a “day in the life” story that doesn’t want to end. I couldn’t even get to part 2 (about pg 241) because the story didn’t seem to want to go anywhere. It felt like yes, there were some things ladies of the time needed to know or understand to get an idea as to the things they’ll have to deal with growing up. But it’s like the story as a whole was stuck.

It felt like torture, trying to go through it for a few days in a row.

I have to say, though, with the characters (and my understanding of where the story goes from here), it is definitely ripe for movies–no wonder so many versions were made. I’ve only seen snippets of the films, so I don’t know everything that happens, but what I could see of the movies is they streamlined the pace. The problem is the story was going so slowly that, though I liked the different characters, it dragged on so long I didn’t care what happened to them anymore.

That’s what made this book hard for me to read. I was prepared to enjoy it, and was disappointed how bored I was instead. Maybe another day I’ll get an abridged version (which I normally avoid like the plague), just to streamline it and if someone wanted me to read it to them…but that’s it.

Wish I could’ve enjoyed it. My first review of an American classic and I just couldn’t swallow it.

3 thoughts on “Little Women, by Louisa May Alcott”