I don’t know why, exactly, but I’ve noticed a significant drain on myself lately that’s just getting worse. And as I put in my rather vague symptoms (forget horror novels–WebMD’s the scariest damned thing you can look at), I can see some obvious sense.

The difficulty is in doing it. How the hell do you just jump up and exercise when the pain in your head tells you to just sit down and do something else that doesn’t require physical strain–you know, because of the pain in the skull.

My mind is eager to get be back out and exercising, then there’s this little sharp pain to tell my squishiest muscle to back off. I HATE feeling like this. This is one of those times I want my mind in the driver’s seat, not a slave to the body it inhabits. It wants the rest of me to be physically strong and on top of things.

Dunno who made this, but I love that image…

My body just doesn’t want to listen, no matter how much that voice screams.

I’ve had little to no motivation to go anywhere the past two months. But the past two weeks have been the worst of all. I already mentioned my tiredness yesterday, having to deal with the conservative who wanted a debate, but it’s more than that.

It’s not tired of people so much as it’s tired of day to day, and tired of life right now.

Ugh–but there has to be a way to get around it.

One thing I do need to do is maybe get to the doctor. I’m broke off my ass, but I’d be hypocritical if I didn’t try to do something for me…especially after talking to dad and helping him pack for his stay in the hospital today.

I guess that’s what really got me thinking hard. We both need to take better care of ourselves. I just don’t know why I’m so tired. 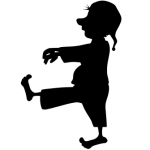 I guess the best compromise is a 5-mile sleep-walk… now where are my awesome shoes?

I wanted to go to self-defense today, but after making sure dad got what he needed for the hospital, I missed the class (and I’ll miss tonight’s thanks to work, dammit). Now I’m sitting here with headache pressure on my left sinus area (sometimes it’s just above and behind my left eye), an ebbing and flowing pain in my left ear, lethargic, and while my mind is alert my body wants sleep.

I’m certain that looking up my doctor (or finding a good one) would help me out. I have been paying for insurance (thank you ACA), but haven’t visited the doctor because I could only get the most bare-bones insurance plan possible. I’ve avoided my OB-GYN just because I don’t think I can pay the co-pay… and I don’t remember what my Sister By Choice suggested I ask her and try to get help with.

But dammit–I can’t be a hypocrite and make dad go to the doc and not take care of myself. I suppose it’s just easier for us to take care of others and not take care of ourselves. I always feel selfish when I try to do for me, but even if it means not paying my credit cards off any sooner, it’s my health and if there’s something we can do, dammit, I’d be a fool not to do it.

With all the health issues cropping up with the few people I know, I’m a little scared to go find out what’s wrong. My over-analyzing drives me bonkers on a normal day, let alone now.

But we do have to take care of ourselves–and the first step is to look at what lifehacker says in this far-less-scary-than-webMD-article, and see how it works. I’ll give it a couple of weeks and if things still suck, then I’m gonna go see a doctor ASAP. But other than lifehacker, I know there’s other things I’ve totally neglected or forgotten about that I have to try to make myself feel better:

I need to move–even when I don’t want to. If self-defense is too hard or it’s bad timing, still go to the gym I’ve been paying for and walk inside…do something simple, even just a few minutes on different machines until I get my energy up.

I need to drink more water (somehow I’ve gotten away from that and didn’t notice–post-it-notes to the rescue!)

I need to actually get the healthy food out of my fridge and make something simple.

Okay, this is probably what’s killing me the most (no pun intended). I buy fruits and such to put in soymilk smoothies, and just glance at them. I don’t even want to eat half the time, and when I do, it’s when I’m out of the house and carbs are plentiful. I’m annoyed by my craving for carbs. It’s not helping me at all.

I need to remember my multivitamins and get some help finding out what my body’s lacking.

I need to eat on a schedule, and eat what I’ve already bought instead of waiting to leave the house.

And I need to–gulp–restrict my coffee. All I seem to want is coffee and don’t want to eat, but I have to or I’m just going to get more tired because there’s no good energy to burn.

And lay off the damn carbs. For some reason, I only seem to want things loaded with carbs, but I don’t feel well afterward. Probably because that’s ALL I have. There has to be some variety, but honestly… I’m annoyed by and bored by food. I have no enjoyment in eating or trying things anymore. I’m filling my pie hole and that’s it.

Though thankfully I’ve done well this week avoiding fried potatoes…but mashed potatoes are still carbs, dammit, and I’ll have to restrict those, too.

Nothing really tastes great except for cold-brew-coffee and even just water (though I need more water than before for sure).

The only way to beat this lethargy and crap (and what is probably a crappily-debilitating tension headache) are these:

Meditation–clear my mind somehow, preferably by getting “in the zone” during exercise.

Water–drink up and take your vitamins while you’re at it. You’re missing something.

Mouth–be very careful what goes in there, and be aware of the food groups you’ve been neglecting out of convenience and timing. Not fair to you to keep doing this crap to yourself.

I’ll take a page from the 20th century’s best American hard-ass. I think I’ll have to write this down and keep it:

Oh boy–I’m gonna take an Excedrin now and try to clear my mind. Dad’s in good hands at the hospital and I need to get my energy up…I’m going to relax, force myself to make a blackberry-banana smoothie, drink it down slowly and chase it with water, and get my running shoes on to go to the gym.

Why I haven’t forced myself to do this before, I just don’t know. I’m going to print out that lifehacker article and see what else I need to do. My S.B.C. can give me some good advice, and I’ll write it down this time and listen carefully.

No point trying to analyze a bunch of question marks.

Boy, where did I go so wrong lately? But that’s what family’s for.