As a recovering recluse, this is a tough topic to approach, but it needs to be done in some way, shape, or form. It hit me when I was least expecting it–passively listening to The Croods when it happened to be on TV a few months ago.

Toward the end of the movie, when things’re getting really bad, the father and daughter (Grug and Eep) are arguing about their safety. Grug insists that they’ll live if they listen to him again and hide in the caves, like they’d always done before their adventure.

That bit of dialogue really hit me, because though it seems obvious, how often do we think about this thing called life and all it really entails? I mean, if I’m writing this I’m currently alive (obviously). If you’re reading this, YOU are alive (obviously).

Beyond that? Well, I think there is far more to that.

I think Eep was right, that there’s a big difference between “living” and “not dying.”

So, what comprises the “living” part?

I’m still struggling mightily. Thanks to the world outside turning darker and darker (or certainly feeling that way), my default reaction–and default life–is to go back and hide in my little cave. I’m also too broke to keep hanging out in the big bad world and have to budget my money, but that’s a story of stupidity for another day. Wish I knew how. Drives me nuts; I can only imagine what it’s like for listeners at times.

I’ve been in a state of limbo since high school; afraid of everything, especially trying new things or being around new people. The people bit is the worst for a chatty introvert like me, because it’s not so much “how will I start a conversation with someone?,” but more like “how will I STOP?” And then I imagine us becoming friends and spending time around each other getting to know each other better.

For some reason, getting to that step freaks me out. The pressure of being sociable and the time that might be involved, the fear of screwing it up, etc. all come a-floodin’ in and I’m a nerve-wracked mess.

And then I’m silent when this voice pops in my head and tries to get me to backtrack or drop off the face of the Earth instead.

And it sucks, because I’ve met some interesting people, but suddenly I’ve got my sister by choice and that’s it. I don’t have friends because somehow something in me just retreats and makes me hide again. They all become acquaintances at best, people-in-line-for-coffee-like-me on average…but not friends.

Hell, most of the time I’ve forgotten their names, if we’ve gotten that far.

And I’m sitting there alone, wondering what the hell I’m doing to myself, because I don’t want to be alone all my days. It’s not healthy for me, and I think I am only getting worse at being in public around people. There are times I’ve wanted to do things with people, but even going out with my best friend would take a helluva leap and a pep talk. Staying at her place wasn’t so bad, we could hang out, but I felt like an asshole because eventually it’d be a bit too much and I’d probably take off just to come back in the morning. I love her like my sister, but somehow I can’t handle staying away from home.

That really kills me: even with my best friend, I can’t get out from this habit of curling up away from people.

And that doesn’t make any sense, because when I do stay at home, I’m almost always looking or any excuse to leave it and go do something else. Thank goodness for coffee-shop WiFi or I’d never get anything done. I don’t know how I can be totally uncomfortable everywhere.

That’s not living; it’s just “not-dying”. I believe that.

Actually, it’s a freaking slow death. When I get to thinking about how I’m (almost) 34 years old and I’ve not done much of anything in my life, I feel like I’m slowly going mad.

More than that, I feel like I’m a space alien that’s been dropped on Earth, and I’ve been looking around at the human race, wondering how the hell I’m supposed to fit in or catch up…something. It was worse this week–I’ve been off the schedule, which was unexpected and a little unnerving. In the back of my mind is worry about my next paycheck being a tiny one when I’ve got all these bills, but more than that, I was at home all week except for going to volunteer downtown for the first time in a long time. I overdid it, I think, because it had been way too long since the last time, but I was happy to be there. I felt productive, even though money was leaving my pocket instead of entering it. Still, I did have a sense of fulfillment.

But the rest of the week was me at home reading, writing, waiting for dad’s packages, playing pinball on the computer, reading blogs, and otherwise being totally bored off my ass with a headache that’s lasted for days now, right behind my eyes.

I wish I had a lot of money because I’d feel free to volunteer my time more often and I probably need to talk to a professional about what I’m trying to write about and explain for you, dear readers. What I keep coming back to, though, is this: I’m not afraid to die, exactly–I’m more afraid I’d end up making things harder on other people through my death. My guilt complex really sucks sometimes, and leaving my debts and mess for other people to clean up would make me upset (and they too, I bet).

But I’m just “not dying” right now–something in me is terrified of trying to live.

I think part of it is this damned status quo. Sometimes I’m laid-back and maybe a bit lazy like dad, sometimes I’m a worrywart and try to do too much like my mom. I haven’t found a happy medium, and I dunno if my insurance would pay for a shrink if I could find one. I’m not religious and can’t find a church I’d like to be affiliated with, even if I was, so that option’s off the table for now.

But it’s easy for dad to say “Don’t worry so much.” Okay, maybe that’s unfair, but I can’t help it. It feels like it because he was 32 when I made my debut in the world. He had full time work, family, a kid, friends, etc. Now he’s retired and doing his own thing at his own pace with a steady income. I have none of those things, and our relationship is similar to roommates more than family.

But this has been our “life” for years. We’re not huggy people, we’re not “let’s talk things out” people…at least, not between the two of us. I don’t even know if that’s what I really want…but I know the way life is for me right now, I could live it the rest of my life–but I know it’d be a freaking short one.

Most of me wants that interpersonal, human connection, where trust and conversation, body language, touch, and all the senses are in use the whole time. But because I’m used to my life the way it is, I’m paranoid and terrified of the possibilities, and afraid I’ll never trust anyone enough myself to possibly require them to trust me as much. It wouldn’t be fair.

I admit, a big chunk of the reason I haven’t changed things is in the back of my mind I’m wondering what will happen to dad, and where would I go, anyway, if I moved out? I mean, I can’t even afford myself, definitely could never afford an apartment or anything like that. So where would I go if I decided to strike out and try something different? I can’t afford it, and I’d be wondering if dad was taking care of himself.

The stupid thing is, I think he’s determined to do things for himself and not “bother” me about them, anyway (if his inability to tell me about his breathing problems for a month is any indication). So why am I harping on this? Why am I letting myself stay in this limbo where I “live” at home and never do anything for myself outside of read every book I can get, go to work, and when I get my mojo back, go to the gym.

That’s my life: home, work, gym, diner to read or write, home. That is IT! And that’s on a good day.

Otherwise I’m sucking precious oxygen out of the atmosphere that would probably be better off in the lungs of somebody who is actually trying to make a difference in the world and live, and to live fully.

That’s what I’ve felt like I’ve been doing in this “not dying” of mine: taking up air and going through the motions. When do I get it into my mind to actually live? When do I stop being scared to live? When do I figure out who I am when I’m not at home, and work on that to the best of my ability? I’m in such a rut–mentally and physically–that I haven’t written much of anything in months or exercised in months.

This “not dying” is a slow death, because I don’t know how to live.

That’s probably the only thing that will do me any good and help me get my health, wealth, and happiness on track. No, I don’t believe in the “prosperity gospel,” but I do think actively working for something will get you there. So many famous quotes revolve around nothing changing if you do nothing…and that’s true. I’m also afraid of what will happen if I do something, because I can’t see any options where I’m at right now that wouldn’t put me so far into debt or make me avoid hurting someone.

There is a difference between “living’ and “not dying.” This space alien just can’t figure out how to transition into a healthier life–mentally as well as physically.

And I don’t care if I have a headache all day tomorrow, too–I’m going to freaking self-defense tomorrow night since I get off early enough. Enough is enough and I wish that voice in my head–the cautious, cowardly one–would shut up and go away.

Sorry I’m being a Debbie Downer today, but I’m writing this to work on my health, as many other people seem to be these days. I’m going to hope for the best for they who need it most, the desire to do more than “not die.”

Everybody deserves something beyond just “not dying.” Hugs all around. 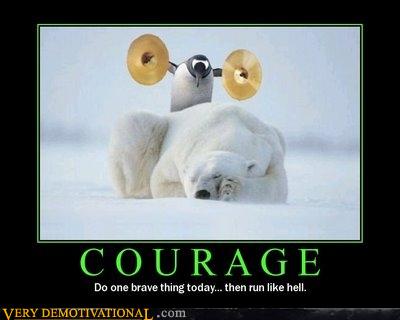 Okay, I don’t know if this would be a good mantra for me to work with, but at the same time, I’m depressing myself again and had to find something ridiculous to laugh at before I just sat there feeling lost and sorry for myself for the next hour or so.

7 thoughts on “The Difference Between “Living” and “Not Dying.””