You know how it is. You’re looking for stories, then you click on one, then another from the article, then another…and before you know it you’ve found a total gem. I’m not terribly surprised at this one, after reading about McCarthy for several years and seeing what his power play as the junior senator from Wisconsin put the nation through.

I’m late to the party, but fireworks- and reading-induced migraines can knock me down pretty well. Still got a bit of pain, so I’ll cut this short.

First, I’d stumbled on this particular article when checking updates on my news feed. I hadn’t been to this site before, as far as I know, and naturally went to check out other sites.

I’d found the crazy backlash NPR got on Twitter about posting the Declaration of Independence throughout the day, 140 characters at a time. The feed kept jumping with angry tweeters at what was being said (1 or 2 thought NPR had been hacked and were trying to make them aware of it) and labeled it propaganda, communist, anarchist, Trump-bashing, trash, hate-speech, etc. 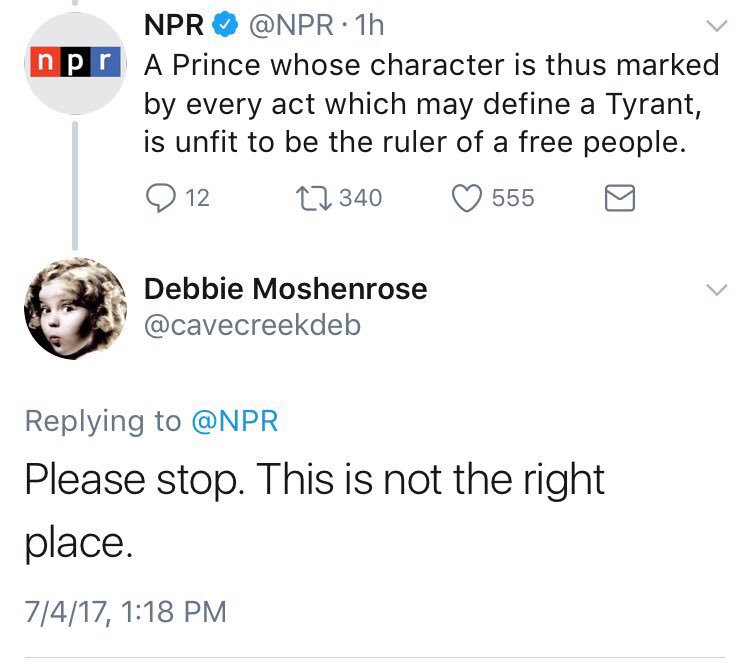 One example of the hundreds of tweets (I’m not on Twitter myself, so this is the best I could do–read more all you want)

Huh–and I thought the language was rather polite and eloquent while just being forceful. Shows what little I know.

That article had a twitter link to one from Wisconsin, back in 2001. It’s worth a read. Reporter J.P. Hunter had to do a 4th of July story and found the Declaration of Independence on the wall. Taking segments of the Declaration (and several amendments from the Bill of Rights), he put them down in the form of a petition and went out on the town to get people to sign it.

Sadly, I can’t find the petition itself. That would be great to read.

The response was shocking as hell, to say the least. One person recognized what it was right away and signed it with a smile. Over a hundred others refused, calling it communist, anarchist, and offensive to God (because his name shouldn’t be on such a “radical petition”).

More than that, they feared to sign it because of the slew of loyalty oaths, unsubstantiated claims of “leftist-affiliations” for different organizations, etc. The repercussions could damaging to their livelihoods just for putting their names to a petition.

The Right to Petition. It’s one of our fundamental rights, used for centuries, and they were afraid.

Ah yes–remind me how much good Joe McCarthy did for the country?

Sadly, it feels we’re there again…or damned close. Far too many citizens are too scared to educate themselves on things that don’t already fit into their boxes. We’re busy scaring ourselves to death at the idea of anything different, unwilling to learn about history and lashing out when it hits too close to home and our prejudices.

My inner history teacher is dying a little more every day as this administration lashes out in tweets and the die-hard followers spread them like they’re the new gospel.

At least Thomas Jefferson could get his point across and took time to use the right words for his day. Archaic English, but still readable, and doesn’t devolve into name-calling.

I wish I could’ve found this info on the 4th, but I wanted the time to reflect. Other than fireworks and barbecue pits, there is another need for the 4th of July–the need to educate people on what this day’s really about.

In a less-mad world, we’d be educating ourselves year-round. On the flip side, I finally appreciate this holiday a lot more, because it should be the day people reflect on what makes America what we are, and how it all started. What did we want as a nation? Look at the lengths we were willing to go for our freedoms.

And look at where we are now.

Yes, it’s worth a few minutes to read and reflect.

I suppose the NPR twitter reaction, and the journalist’s McCarthy era reactions reveal something we need to work on.

For now, some good, insightful reading for your pondering enjoyment: a transcript of the stone engraving of The Declaration of Independence, courtesy of the National Archives in Washington D.C.

Hope you had a happy 4th, continue to have a great summer, and keep that few pounds of gray matter in your skull well-fed and watered with facts (but not watered-down).