As interested as I was to get into the subject matter, I have to admit, the presentation was a bit much. I bought this book many years ago when I found myself an anime-freak and wanted to write and be able to include some real terms and such about Japanese architecture.

I have to say, Mr. Morse was brilliant in laying out Japanese Architecture. The illustrations in these pages are his actual illustrations, taken from his notes. The man had an eye for detail and remarkable ability to render it on paper. I admit the way it was written felt a bit archaic, then I read the introduction and realized the book was REPRINTED in 1961. Morse was writing this in the 1880s while living in Japan as a teacher and zoologist. A friend advised him to record Japanese society and architecture before Western influence polluted the purity.

Safe to say, he succeeded. A bit too well, actually. And frankly, I’d like to learn more about the man more than what he put into this book at this point.

Granted, we don’t quite write like this anymore, as if for academic publishing only (which is how the wording feels, like a lecture we’ve stumbled into, at times). I did find it a bit funny how much the author lamented the architectural and constructive abilities of American artisans, deeming the Japanese far superior. Those bits, though amusing (and refreshing that the author wasn’t prejudiced in preference for his own culture), were a bit distracting and got a bit old. Thankfully, it slackened off the farther into the book you went.

Still, when it comes to homes, interiors, exteriors, tools used, clever uses of building materials, bridges, shrines–there’s a little of every bit of architecture you can think of in this book and about 300 illustrations to punctuate it. The language isn’t as difficult to discern as Shakespeare, but it’s rather dry. Not a fun read, exactly, but full of great information. 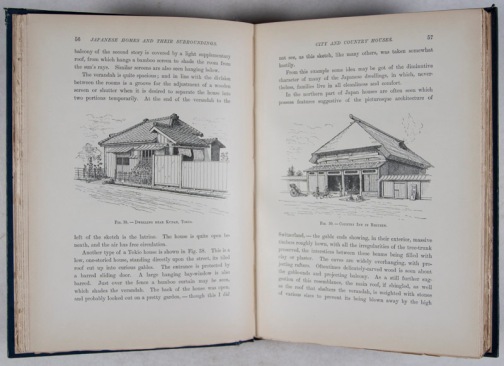 I would recommend this to architectural students, historians, and those interested in Japanese culture and history. Worth a look and I can see why it’s a staple regarding Japanese architectural texts. Wouldn’t surprise me in the least if this book was a primary resource for other authors on Japanese design before Westernization began.