For once, I got to open on a Monday. That should’ve clued me in on the weirdness that would happen. I’d seen a call list tacked on the bulletin board by the front desk, but nobody ever mentioned what it was about to me. Well, I was in the odd position of “not enough to do” and guess what I ended up working on… 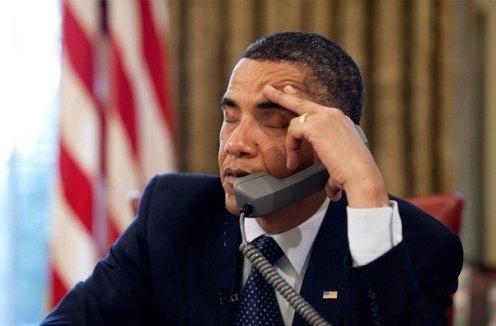 I KNOW this is how I looked (with a little prayer) before every phone call I made. Tomorrow I’m bringing my magic 8 ball.

The phone is naturally intimidating to me. I probably could’ve got more than 20 calls done if it weren’t for me spending every moment asking a trillion questions first.

Since this was a “let’s get back in touch with former or prospective customers and tell them about a new deal” type of call, I wanted to make sure I got my bases covered. I wanted to know the best short-and-sweet way to say things from one of my bosses, what exactly the dates and times were for this deal, and the steps necessary in case I had more success than others did. I didn’t wanna be stuck going “uhhhhh…” into the phone when they actually expressed an interest.

And when I’d gotten enough clarification (and probably made them want to commission a voodoo doll of me to punish future annoyances), I started calling. 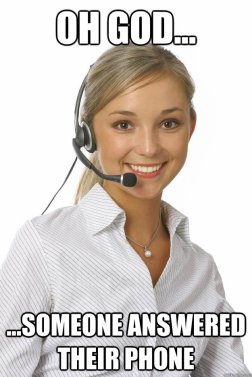 You can tell I’m not much of a salesperson because I was hoping I could just leave voice mails and not actually talk to another human being this morning. I really didn’t want to intrude on someone’s day, but the phone was picked up about half the time, and I did my sales pitch.

I had one hang up, a few “not interested,” and a few–gasp–interested. Let’s just say my paranoia can be helpful at times–I had enough to work with to give them some good starter info. Some might even call back and take the deal after discussing it.

I am never one to want to high-pressure sell someone. Hell, I’ve been at the receiving end of that far too many times to count and hated it so much. I know we need sales, but I don’t wanna be that asshole about it, the one where you know the person’s rolling their eyes on the other end of the line.

I am a nervous babbler, and did babble a bit (one hung up because I had something stick in my throat at the wrong time and was trying to talk around it–my 2nd or 3rd call, I think). But I wanted to ease the pressure on both our ends.

Oddly enough, my chatter might’ve helped. I made less calls, true, but it gave me a bit more confidence that I really didn’t have starting out. I was getting rejected and just went on pleasantly throughout the short bit of my list.

The more calls I made, the more rejects I got, the better I became. I got 3 people contemplating the sale in the 20 calls I made, whereas the list of 20 before mine had zero (at least, not written on the list).

At least I’m in a better position to get it right tomorrow. Just hope I can get enough of it done. What I learned is I can’t make it sound like a robot. I have to ask some questions and see how someone’s day is, establish rapport.

That’s when I got some feedback–or they were just in a good mood. Perhaps lightning will strike twice. I just find it funny how scared I am of rejection, and being rejected over and over may well help me get over it. Hell, I’ve rejected telemarketers all the time (and now I’m in the uncomfortable position of getting an idea of how they feel).

At least I know I can use a basic script guide (and be myself) and not be a total idiot. Hell, give me a week and I might like this stuff.

But I really, really hope not. Then I might be pressured to become an asshole to increase sales. There has to be a happy medium somewhere, but I don’t think employers know where it is. 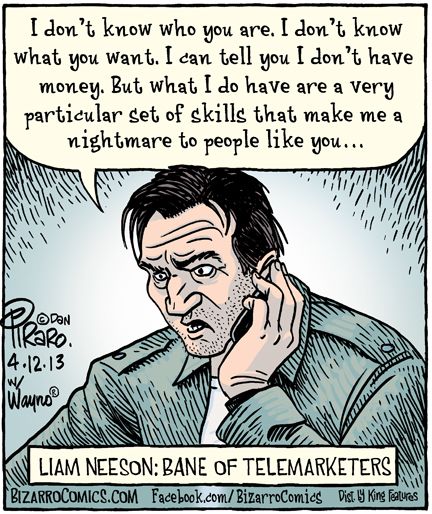 You magnificent BizarroComics.com, I salute you!

2 thoughts on “My odd turn as a telemarketer today: or, how to thrive on rejection.”