DISCLAIMER: I am not a parent, so I will humbly request that you put your pitchforks & torches away for a few minutes…or at least go sharpen the blades in a quiet corner. Thanks.

I don’t know how I ended up reading or researching on this a couple of weeks ago–I just know it’s an intriguing idea to ban kids from certain establishments or at certain times. And by “kids,” I’m thinking of anybody about age 10 or under…because by 6th grade I’d hope pre-teens would know how to behave in public.

Now I won’t EVER mean ALL restaurants–hell, McDonalds is an obvious kid-friendly place, as is Chuck E. Cheese and similar restaurants. They cater to kids and their families.

And don’t get me started on diners, casual or “coffee-shop” types. I do think they’re meant for families in some respects, but I gotta admit, I wonder about at least having time restrictions. 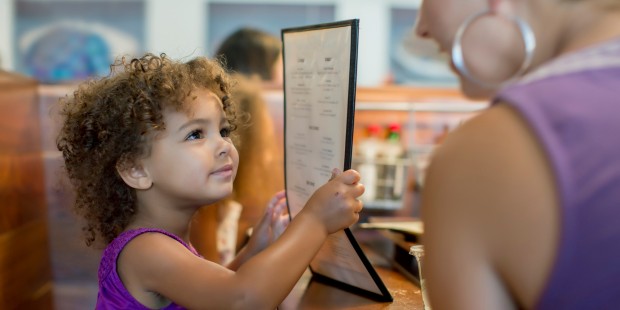 Seriously, a place that has high chairs and kids food that looks nothing like what adults would order…yeah, they’re more than aware of what kids “like” or will eat without fussing while adults get what they want. Most places like IHOP and Denny’s have hours where they entice families with kids to eat, like between 2 and 6 pm, give or take an hour. It works because there’s more staff, the kids aren’t super tired yet, and everybody can dig in and take their time.

I’ve read about restaurants not allowing kids up to about age 9 or 10 in after 7pm. I think that’s a pretty good policy, because when they’re in elementary school, and it’s a school night, at what time are they getting to bed? And for me, bedtime was impossible on a full stomach.

I’ve been to Starbucks in the middle of the week and there were 7 year old kids there with their parents until about 9pm… on a school night. Sheesh, when’s their bedtime? I think elementary school kids eating out past 7 p.m. is a bit reckless… and where you eat is important.

But I do have issues with someone trying to make ALL restaurants be kid-friendly when many were never intended to be.

Certain restaurants are going to be geared toward a certain crowd, like people who want to enjoy themselves AWAY from kids for a while, or bars, or both.

I think certain things have to be taken into account when it comes to restaurants and their decision not to have kids in the door:

I think this Eater.com article hit the nail on the head, asking the questions I want answered.

I can already hear the “my child is always well-behaved” line, as I’ve heard it before a thousand times. Well, unfortunately, all it takes is one bad day for the kid to be a cranky nut in the wrong place and give the opposite impression (and make other people angry). It sucks that we always seem to remember the negatives more than the positives, but it’s true…and other diners don’t know your kid like you do.

So, should kids of certain ages be banned from restaurants? Not all restaurants, that’s for sure. Some certainly benefit from the restriction, and others wouldn’t. Frankly, if the place is catered toward kids and families, then have fun… but at reasonable times of day. Cut-off at 7 pm, if not a bit earlier, is sensible to me.

I think kids need to be allowed to eat out. It’s a great chance for the kid to learn public table manners. If they have good manners at kid-friendly places and then casual dining places, they’ll be more prepared for those higher-end restaurants (so he won’t embarrass his future prom date, maybe?). 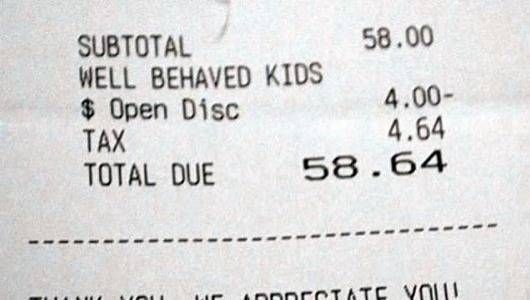 Hey, never too early to start…

But honestly–if a place is pricey, quiet, intimate, doesn’t have a kid’s menu, or high chairs, or changing tables, or has a very prominent and lengthy bar, or no room for the Mighty Strollers… give some poor Millennial a chance to earn some extra cash through babysitting while you enjoy a night out.

3 thoughts on “#024–Is it okay to ban kids from certain restaurants (or at certain times)?”