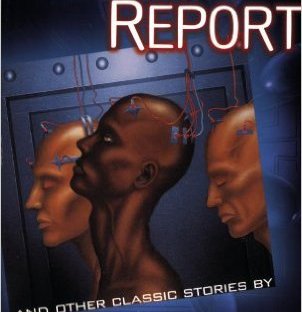 The more I read from Philip K. Dick, the more I enjoy or at least respect the man’s work. The Minority Report and Other Classic Stories by Philip K. Dick definitely does not disappoint.

I’ve read The Man in the High Castle and Do Androids Dream of Electric Sheep? already, but not Dick’s short stories, at least, not until the past couple of weeks. I found the variety of scenarios interesting for these stories written between 1954 and 1964. Other than the “in the future” element implied in each story, a few of the themes he tackles consists of a post-war (read: nuclear) landscape and society, crime and law enforcement, and the idea of “precogs.”

Dick was a big believer in the idea that some people may have the ability to predict the future to an extent, which is the main focus of “The Minority Report.” Two or three other stories don’t focus on the “precogs” exactly; it’s more they are what he accepts some humans may become in the future and they’re just mentioned in passing.

And no, I haven’t seen the movie–I wanted to read the story first (it’s my schtick, I guess).

I don’t want to spoil the stories for you (and the Goodreads info will give you plenty of basic synopses if you’d like to look). In a nutshell, other themes in these stories have to deal with human-technology relations, psychology, “the system” and its flaws, an automated government structure (in two stories), sci-fi writers in the past and the future (the results of which are pretty funny in “Orpheus With Clay Feet,” and the world after war.

Probably the most startling story in the mix was “The Days of Perky Pat.” Let’s just say that after a major nuclear war, the kids–who were born just before or after–are seemingly more mature than the adults. I found it startling, then figured this could well be a nostalgic (or denial) response to the world around them and they find themselves playing a game with utter seriousness like kids tend to do. As the story unfolds and the adults communicate with other adults outside their area to play their game, it gets more and more interesting.

I think all these stories should be read and re-read again. Dick’s writing is open-ended enough that he doesn’t claim many dates and can be laughed off–there’s something about the “what ifs?” he’s asking that really make a reader think. I’d recommend this book to any sci-fi nut, short story writer, futurist, or just anybody wanting to pick up something they never considered reading before just for the hell of it.

There seem to be quite a few Philip K. Dick short story collections–eventually I’ll be buying more to read, because these are certainly worth revisiting!