Taking a breather from the bill-pay broke-dance right now. Seems there’s a push to make me into a trainer for one of my jobs, kind of an in-house increase of possibilities, so maybe I won’t have to go looking for Job #3. I’m gonna keep my ears open and see what happens and if there are any changes that I won’t be amenable to.

That’s what gets me the most, when you’re prepping for something and think you know what you’re getting into, then the powers-that-be change everything on you. I don’t want to waste people’s time and end up not wanting the job they were grooming me for.

On the other hand, I can’t afford to be a doormat anymore, subject to whims that leave me in just as bad a financial–and stress–position as I’ve always been in.

I wish I could say that I’d been doing a helluva lot of good work on job searching and getting my ducks in a row. Probably the best thing I did was sign up for a couple of online courses on technical writing and communication. Otherwise, I lived in a wooooorld of pure pro-cras-ti-na-tion (cue the Gene Wilder/Willy Wonka parody).

Holy crap…I think it, and suddenly it’s right there on the freaking internet. I just looked it up on a whim after writing that… I need some tea… or a drink.

Yes, I was working, but not on anything that could be considered honestly productive. I seem to really really like my to-do lists, to the point where I’ll spend a whole day re-arranging the order I get things done in, and the rest of the day (or weekend) avoiding what I put on the list like the plague.

I found myself for the final time (I mean it this time!) re-organizing my reading-order list, and using up half a bottle of correction fluid on my weekly planner. My goal was to add in space for my “impulse-reads” on the spread-sheet and leave room in the planner, too. I also wanted to make room for study time for the classes I’m going to be taking for the next few weeks (can’t read “The Complete Sherlock Holmes” and analyze it with due diligence while working on two courses after all.) 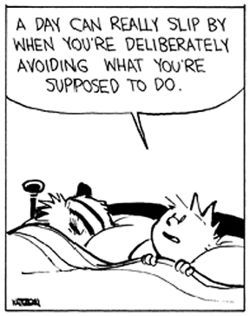 Ah yes, my philosopher has spoken…

But it shouldn’t take me hours and days to do this stuff. I’m just glad I incorporated the books I bought online this week (yes, I broke my no-book-buying vow, and then some). I’ve got about 30 coming to my door.

I blame Better World Books. I love throwing used books in my virtual cart. I had gaps in my collection of books I wanted to read (especially series I started getting invested in–I wanted to get the rest). Hence the reason I went on a buying spree. And when you’ve got the Bargain Bin deal of 3 books for $12, and then $3 per book after…yeah, I spent hours online looking for the perfect amount of books to buy that were in my “budget.”

Again, PROCRASTINATION!!! It’s like having a fake job for no pay–you’re busy, but not productive. Gah! And to top it off, I haven’t been feeling very good most of the week, so that’s another whammy against me.

But at least this to-do list (call it an 8-10 year reading plan) makes more sense than the dozen or so I’ve tried to use in the past year. I get fixated on one aspect of what I’m trying to do, and then I underestimate exactly how much I’m going to get to do.

Funny how I’ve become a slave to the bad habit I’ve warned undergrads about when they asked what to do for thesis papers. I BADLY overestimate the amount of time I have to play with and underestimate how much time I’ll actually spend working on the paper/story/project/whatever.

I’m almost done with one book I needed to re-read, and I have the weekend ahead of me where I can hopefully get more read and written. I just hope this fog leaves my head (dunno why I’m so tired right now) and I can finish this book I’m studying so I have time to absorb it.

That’s the tricky part about running to stand still–you really don’t take anything in like you should…and then you get to what you really need to do, and you’re too tired to try.

I’m sure some people could point me to some great “how to stop procrastinating” pages…but I’m sure I’ve read most of it before. The hard part is actually making and sticking to the good habit I’m trying to make. I forget very easily if I don’t do things constantly. Repetition, repetition, repetition. 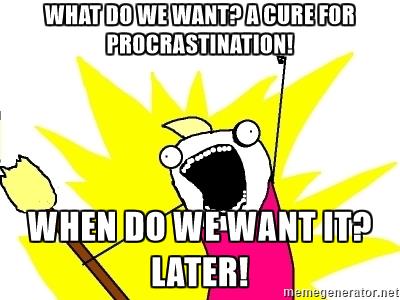 And now I’m typing and probably repeating myself because it’s freaking cold where I am right now, my fingers are twitchy, and I’m PROCRASTINATING on finishing my reading. No more to-do lists today, especially when I’m not sure what this weekend will bring…or next week, for that matter, because I don’t have my work schedule.

So, step one in defeating procrastination–make a note to check later and move on to something else (like reading) that you can get done right now and NEEDS to be done, preferably before I fall asleep in my tea.

So far so good, thankfully.

Step two includes consulting my magic 8 Ball, then give it a best out of three, then five, then a few rounds of Tetris…

5 thoughts on “Procrastination makes my world go ’round & ’round & –wait, what?”