And by salad I mean a bowl/plate full of spinach or lettuce with other assorted crunchy veggies and a trillion other possibilities. I can’t help it. Ever since I saw that little red printing on the label, under the huge letters proudly proclaiming MIRACLE WHIP, well, I’ve wondered…why the hell isn’t it a “sandwich spread” instead of “salad dressing?”

Okay, I admit, in the case of “egg salad” or “potato salad” and other things like that, I can understand. Still, I’ve never heard of this product being poured over a mix of greens and veggies and eaten like regular salad dressing.

Now, why is it different from its rival, mayonnaise? Well, this “Real Simple” info page is good for boiling it down. I’m not here to debate that too much, but now it makes me wonder what the hell mayonnaise was used for? Okay, I did some reading, it’s apparently a base for many sauces (Hollandaise over a spinach and mushroom stuffed omelette at IHOP comes to mind). 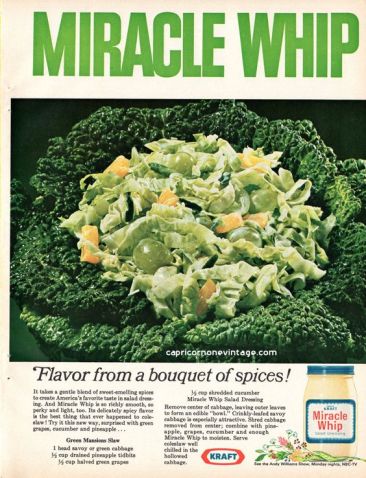 Hate to say it, but that picture doesn’t make this salad look very appetizing.

But “salad dressing”? What other dressings were on the market to have it more closely-linked to dressings than mayonnaise?

Apparently, there’s not enough oil content in Miracle Whip to justify calling it another type of mayonnaise, but otherwise…

I have never seen anybody fix themselves a salad and drop a big dollop of Miracle Whip in the middle of it. Other than sandwiches or part of some recipe, I haven’t really seen Miracle Whip eaten in any other way.

Maybe the “salad dressing” label is more a traditional hold-over (kinda like we called Pluto a planet for about a century til they made us knock it off–the bastards). Apparently, the more “pour-able” dressings didn’t show up until 1925 (Kraft at the rescue again).

So, a big dollop dropped into a bed of leaves, I suppose, isn’t as far-fetched an idea for turn of the 20th century after all. But take a look in the grocery store. Usually it’s a whole side of an aisle, a wall dedicated to bottled sauces and dressings with over a dozen different manufacturers these days.

And Heaven help you if you live in the Houston-area and want Russian dressing–you’d need a retired-CIA-KGB task force to help you find that one bottle of that stuff. I tried it once and liked it, but my clones never found it again…I’m starting to think it was a very-tasty figment of my imagination.

So, does anybody rock the Miracle Whip in their “normal” salads?

Just curious, because this has always bothered me. Floor’s yours…

6 thoughts on “#020–Does anybody actually use Miracle Whip as a “salad dressing” on actual “salad?””