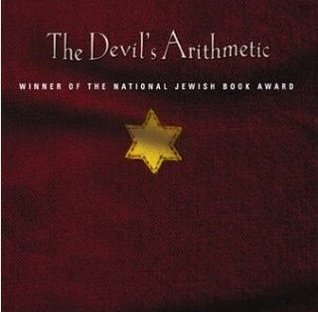 I admit, I might not have been in the right place when I first read this book, which colored my initial review of it. But the second time around, it got to me a little more than I expected, and I could enjoy it.

The Devil’s Arithmetic has an interesting presentation and narrative style, which follows 13-year-old Hannah, a Jewish girl who is fed up with Jewish holidays and family that do nothing but talk about the past. But on this particular Passover Seder, something is going to happen to her to change her forever. She’s only understood the past in detached terms and through family. When we meet her, she’s weary of the family gatherings about people and events that she feels have no relevance to her (“All Jewish holidays are about remembering, Mama. I’m tired of remembering.”).

I think most of us can relate to that–sitting through some bit of family history that’s like an inside joke that nobody’s going to let you in on, at least not until you’re older.

In this case, Hannah is somehow transported into 1942, into the life of a young girl named Chaya, just in time to take part of someone’s wedding, and right as the “resettlement” begins by the Nazis. I found some of what was brought up through the characters to be very interesting, a story of survival, of course, but also one of just existence, of not knowing and realizing all wrapped up together.

The bits where Hannah tries to come through Chaya and tell people who she really is kind of distract a bit at the beginning, but these moments lessen as events unfold and she lives as Chaya. I found it interesting that as I went on reading, I even forgot she was really Hannah, about the same time the character did and became absorbed in what happened to her.

I thought the viewpoint and depiction were good, as one who is present but not comprehending. When I think of what I’ve read on the Holocaust and survivor testimony, there seems to have been quite a bit of this going on, so the feeling is well-in-hand.

I would recommend this to young readers, especially the ones who like to ask “how could they not know what’s going to happen to them?” Well, this gives some good indications as to why the Holocaust was so successful, and why some people could survive it. The lesson Hannah takes with her in the end is a good one, though I admit I wonder at the mechanics of her journey to the past.

It’s not a lengthy read, and you have to suspend some disbelief when she first hits 1942, but then just get absorbed, and let the story unfold without too much analysis. I know there’s also a film version starring a young Kirsten Dunst that came out through Showtime in 1999 (with a young Brittany Murphy, too), but I haven’t seen it yet, so I can’t recommend whether or not it would be more confusing to see it after reading the book.

Still, I think Ms. Yolen did a pretty good job looking at things from a young teen’s perspective and letting the reader feel it. I’ll recommend this book.