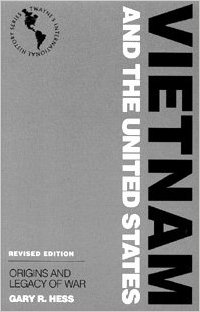 I picked this book up because it was required reading for my Vietnam war and film class a few years ago, but never got a chance to read it in its entirety until now. And for such a slim volume, it is packed with lots of great information for people, like me, who generally know little about Vietnam short of knowing a few veterans and hearing some of their stories.

And I admit, a few too many movies…later on when I was old enough to appreciate them. But they didn’t give the story of why things happened–probably the most important question to a historian after “when?”

For a basic history, and a leaping-off point to learn more, I’d definitely recommend Vietnam and the United States for that. It’s almost 20 years out of date (1998, after all), but gives some good theories in the epilogue for the different schools of thought, and a nice basic chronology to work with. I especially liked how the text was structured, going between the North, the South, and French (then American) views, with a little introduction into how Cambodia and Laos figured into the affair (usually they’re glossed over, but again, the book gives a place to start looking for more, not terrifically in depth).

I never had Vietnam war studied in high school because the general rule of thumb was not to discuss anything up to 25 years before present in history class (which put Vietnam on the edge of that). If you already know a lot about Vietnam and the war, this probably won’t be a book to blow your hair back. But for beginners, it’s a relatively short read for what’s essentially a textbook. I’d recommend this to any history buff to get them started on the journey to getting a more complete picture of this much-televised and much-despised war.

So, the flim class and this book were useful for those who never got a chance to tackle Vietnam in their basic education–and I’m sure it goes beyond. Definite recommend.