Credit to msnbc.com for the featured image.

Okay, this question’s been one of the constant ones in my noggin, and I’ve never gotten a succinct answer for it.

There’s a great political cartoon I found in U.S. News and World (which I cut out and kept in my files) that really summed up what was bugging me about the invasion talk in 2002 and 2003: 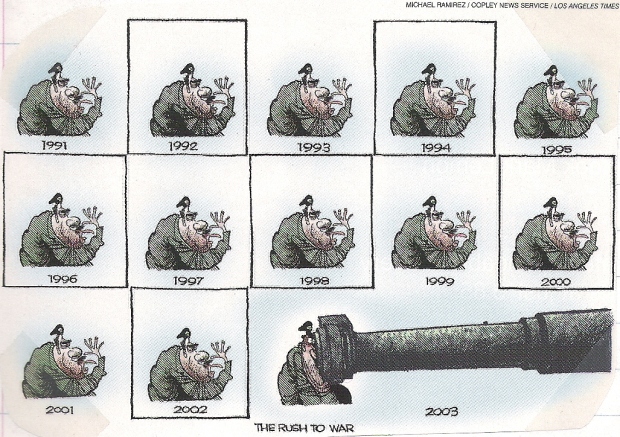 By M. Ramirez, and thanks to U.S. News and World for printing.

I found myself wondering, as all this talk conflating 9/11 with Iraq came into play, and then all the stories about Saddam Hussein and what he was up to. I remember the reports from 2001 to 2003, talking about Saddam trying to get his hands on “the bomb,” trying to build nukes, chemical weapons, trying to kill Dubya’s dad, scaring his neighbors, etc.

The problem for me was that most points the pundits brought up weren’t exactly news. There had always been a push to get nuclear material. There had always been saber-rattling against his neighbors, there had been several purges of military and government people, and civilian deaths. Most were likely given about 4 inches in page 14 of the weekend paper, with the other awful world news.

As the push to war intensified, I started to wonder more about Saddam Hussein and what had gone on during Desert Storm, and what a bad guy this must be. So, I picked up some documentaries and books on Iraq and Iran (some of which I still haven’t finished, I admit), and a bio of Saddam Hussein that made me glad I didn’t know the guy.

But when war came–again–this question really hit me. Maybe one of you knows the answer, because the last time I asked, I still got nowhere.

That was around 2005 or 2006, with a die-hard Dubya fan and family member. Somehow we got into a political discussion about the military and what we were doing around the world. I was trying to learn, they were trying to prove a point–it’s usually the way it goes with this particular person. I figured this would be a great time to ask the question, in all seriousness. I asked them: “Before we invaded Iraq in March 2003, what had Saddam Hussein done that he hadn’t already been doing for 13 years?”

For the next half hour, I heard a lot of calling Saddam out on his bad behavior, the chemical weapons…nothing new. So, I had to stop it, and ask again, “What had Saddam Hussein done that he hadn’t already been doing for 13 years?”

I got no answer. But the person I’d asked was adamant that we had to get rid of Saddam Hussein.

In retrospect, I guess I was looking for the straw that broke the camel’s back. I wanted to understand “why war?” and “why in 2003?” I wasn’t trying to be a smartass (I had to make that very clear on a few occasions). I genuinely wanted to know because maybe I missed something big, that maybe there was some larger issue or event that was buried and I didn’t get the correlation, I don’t know.

I remember the day the news flung it out there that Saddam had been captured. I was happy as hell, because I believed he was a bad guy that really needed taking out. The only better news was hearing that they’d gotten the sons before Saddam (what I’d read about them and saw on documentaries made me wonder what it’d be like if THEY were in charge–shudder). 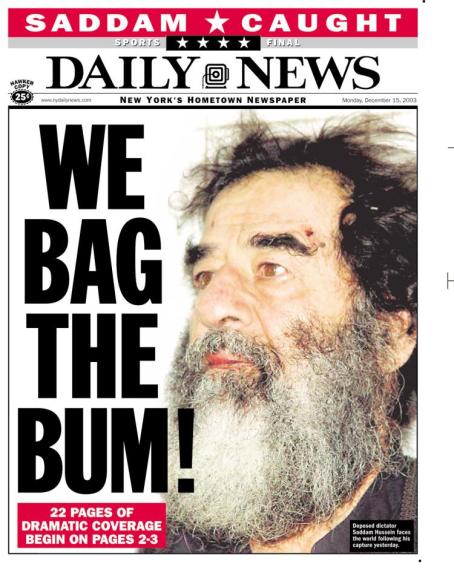 I was happy for about half a day, and when the euphoria wore off, it hit me–“so, what now?”

Well, anybody with a pulse at least got a glimpse, if not understanding in the next few years. Kinda like that “Mission Accomplished” thing on the carrier–it’s not the end just because we got him. Makes me wonder if the government thought it’d be that easy, too.

I’m asking it again now, dear readers, because though I’m glad Hussein’s gone, it still bugs me that I can’t figure out what the last straw was…or if there was one at all. Part of me thinks they were grasping  at straws more than anything and that’s why we’re where we are.

But if you know the answer–or some good info I can work with–I’m all ears, and thanks.