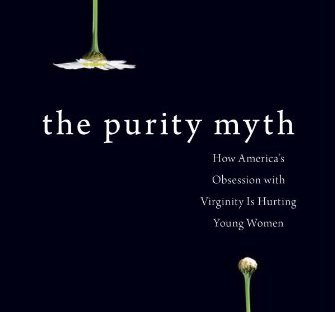 Wow–this month I’m touching on all kinds of subjects and authors I’d never really read about. As far as I know, I’d never read any of Ms. Valenti’s other books or her blog. On it’s own merits, I’ll say The Purity Myth is a rather tough read–emotionally. It’s also not a book I would call an end-all, be-all book on the subject of women in society, and the virgin-whore dichotomy that defines “good” and “bad” girls for everyone. I think of this book as a jumping off point to asking more questions that need asking regarding women.

And not just women around the world, women here in the U.S.

The title alone will make enough people angry (and has, according to Ms. Valenti–who posted the cover on her webpage just to see what kind of reaction she’d get). I like it because it got me thinking: what does purity really mean? And why, all over the world (and even in our so-called westernized, liberty-loving society), are women held up as the standard of moral and pure?

I admit, the book does get a little repetitive, and some of her footnotes are little snarky asides that are kinda funny if you’re already a feminist, and will piss you off if you’re not.

On the other hand, if you’re anti-feminist, the whole book will piss you off, so maybe it’s not for you, unless you’re totally open to hearing and learning differing opinions. I think that’s what this book is REALLY good for–opening a dialogue.

I gotta admit, I like this a lot. It’s simple, but not…& you know she’s not the only one who’s been saying it.

The book is also a fantastic attack on abstinence only education, which you can sum up in mostly scaring girls away from having sex, so that when they’re bags of hormones like the boys, boys and girls are still engaging in sexual behavior, but without understanding and without protection. There’s at least 50-100 pages dedicated to that in the book–I’ll let you make your own judgments (and I’ll be looking stuff up and making my own).

There’s too much varying information to give a good synopsis for you, dear readers. But one thing that’s probably not as shocking as it should be for me (though maybe that’s what shocked me most), is the many ways that the virginal equals pure, but also equals youth. In so many ways–and I remember some of the dumbass trends when I was in school, like baby-doll shirts (shudder)–women are meant to always look young, always look pure, virginal, fresh. More than that, women of color are already discriminated against at the outset because of the myths of promiscuity and such. So, in essence, the pure girl is always young, a virgin, and white. I was glad Ms. Valenti made that point, because it’s something that just doesn’t get noticed or acknowledged.

Don’t believe me?–Google pictures of “Purity Balls” (something else I’d vaguely heard of before this book, and my jaw dropped). I was scrolling and scrolling, and I sure didn’t see any “non-white” faces in those photos!

More than remaining “untainted,” the woman is supposed to be forever young. I thought the jokes about a woman being 29 at the oldest and staying there was a stupid sitcom or rom-com invention, but nope. I’ve talked to a few women and it’s a real fear, seeing that number turn over into a new decade…but that’s more for another day. It’s disconcerting, and very visible because of the jokes about a woman’s “shelf life” I’ve heard all my life get a new meaning with what I’ve found here. And there’s a ton of info about ageism and how after a certain point, you can’t be considered pure anymore.

I found The Purity Myth a refreshing read because there were so many questions poking me in the brain over the years about the sexual double standard. What I didn’t expect is the multitude of layers and arguments and counter-arguments regarding the virgin/whore archetype and the division of women between virginal/pure and those who’ve had sex/whore. Hell, Ally Sheedy’s “basketcase” boiled it down succinctly in the 80s. The Purity Myth exposes the layers and gives enough outside sources for one to look for answers for his or her self.

I wonder if The Breakfast Club could be the high school student’s I Ching, but I digress.

This book also gives a lot of exposure to the various levels of everyday misogyny and knee-jerk reactions to it (on all sides of the female sexuality debate). I always wondered how rapists could get away with their crimes with just a slap on the wrist, or how prevalent “blaming the victim” really is. In it’s chapters  found it helpful for showing that all these different layers of control–more than I had even thought about–have allowed the “rape culture” to flourish. More than that, there’s a stirring of hope in that it can’t be all on women to change this.

I don’t know who drew this, which sucks because I’d love to give kudos to them for it. I think it does a good job speaking for itself…& the issue.

For those reading this review who are getting the idea that maybe The Purity Myth is a book they couldn’t possibly agree with or want to read, I recommend doing so anyway. I think it’s worth a read much the same way a Michael Moore film is worth watching: you might not agree with them or can’t stand them as a person (or vice versa), but they’re gonna bring something up to make you go, “Hey, lemme go look that up for myself.” This is a great book for that.

One thought on “The Purity Myth, by Jessica Valenti”