I’ve found that when it comes to myself and the world around me, part of the reason I’m such a ball of anxiety is my tendency to be honest…usually at the worst times. The ways I’m most honest is with other people and financially, with the exception of my credit card debt. I get amnesia and suddenly when the bill’s due I am shocked at how much the statement is. But employment and taxes–yeah, they bite me in the rear every time.

I dread the new year because I’m concerned about my taxes and if I’m going to end up in worse debt because of how much I owe. There was one year that because of my new job situation and how much money I’d made, I owed nearly $2000. I wanted to cry, because there was no way I had that much. Part of my current financial woes comes with not having enough to do installment pay and I ended up putting that money on my credit card.

I’m still paying that little bastard card off and that was from early 2015. And I’m in worse shape because I changed to less income overall, but one job doesn’t withhold and is considered a self-employed opportunity. That means I’m going to owe quite a bit this year, too. Tomorrow I’m going to a tax preparer to ask a ton of questions and understand how bad off I might be and try to save enough money to pay out of pocket…and make a better plan for 2017 so I end this awful cycle.

You know how much money I’d save if I cheated on my taxes and didn’t include that pay? You know how much saner my tax preparer and I would’ve been had I just walked out the door and pretended that I never got paid through another job?

It’s occurred to me that my honesty doesn’t pay well. I can’t lie on job applications or in interviews to save my life, which hinders me badly.

When I’m at work and am concerned I might have screwed something up, I can’t keep quiet about it and have to ask advice instead of shoving it under the table. One of these days, it very well could get me fired if the gaff was bad enough.

If I damage somebody’s property, or think I did, I always make a call or leave a note, knowing they may blow up and sue my pants off and make my insurance agent sweat.

And I really can’t just neglect aspects of my taxes because I’m in fear of getting audited by the IRS and penalized out the wazoo.

I came to the conclusion this weekend that one of two things needs to happen:

I don’t like cheaters and I don’t like to cheat, but it makes it hard to be honest when it feels like you’re shooting yourself in the foot constantly. I really am afraid of messing with the government, and I don’t make enough money to just comfortably hand over what I’ve got at a moment’s notice. If I did, I’d take that money, make my emergency fund bigger, and pay off all my credit card debt first, anyway.

And this year’s going to get more complicated. I’ve been doing some reading and need to know what’ll happen when I finally start selling and making money from my writing and painting. I am sick of not making ends meet, but if doing what I really want to do makes me go into worse debt, I’ll never get out of the hole. Don’t get me wrong, I still like the part-time jobs I have now, but I don’t get the work hours I need as often as I need them, so I do need something else. If it fulfills my creative side (and I can make a living from it), then happy am I!

Hence the reason I’m going to the tax-preparer tomorrow, so I know what I need to know to avoid tax penalties and such. And if there’s anybody I should be good with telling the truth to, a tax-preparer should be the one. I just can’t help feeling like an idiot around them, though. I used to do my own taxes when I had a very simple situation, but now…sheesh. If I have to go to quarterly taxes and get some bookkeeping software, I want her to give it to me straight and let me know the best way to get things done.

I hate how my good ideas seem to come so damned late. Wish I could’ve thought of this six months ago, and done some research when I quit that job I hated, then I’d probably not be a ball of anxiety right now. And my credit card’s going in a damned drawer. No more of that crap, and no more buying online. That’s one resolution I fully intend to keep!

Still, why does doing the right thing and being honest and not cheating have to hurt so damn much? That’s what sucks to me, because I know other people cheat, and it doesn’t seem to bother them a bit…why does it have to bother me so much?

Now that I think about it, I’m sure part of my anxiety stems from not just honesty/ dishonesty about debt, but a lousy relationship regarding money my whole life. I can’t ask for money, even from my dad back when I needed gas money and was practically on fumes in the tank (I waited until he offered). I’m also not a great saleswoman at all; I freeze at the idea of suggestive selling over the phone at work. Next time I’m there, I’m xerox-ing the script in the book and getting a better grasp on the price ranges we offer. 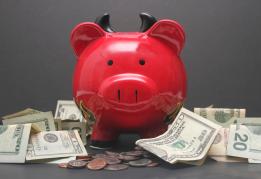 Yeah, that sums up our relationship pretty well…

Making money and I are always at cross purposes. I never sell my things, don’t even know how to do eBay or CraigsList, so I end up giving stuff away instead of putting a price on it. I need to learn how to sell and determine an item’s/story’s/painting’s worth, because at this rate, I’m gonna be the most generous broke person I’ve ever known this time next year. My throat closes up and I practically get the shakes at the thought of having to negotiate. I’m going to look for a crash-course to improve my skills (okay, “gain skills” would be more accurate). I have “pushover” tattooed on my forehead and need it removed.

Huh–revelation time. While writing this, I got thinking more about my discomfort with money and where the hell it came from. I think when I was a kid, somehow I got the idea that “asking for things” equals “being greedy.” I don’t remember if mom flat-out told me to not ask for things, but wait for somebody to offer. I do remember watching kids throw tantrums if they couldn’t get a candy bar or toy, and mom muttering about giving the “little brat” a spanking. Then in later years, when shopping with my stepmom and her kids, she sometimes told me to ask for things if I wanted them. In the clothes department, she’d shoot me down as soon as I asked because I was too fat for what I wanted to try on. Eventually I learned there was no point in asking.

Guess I shouldn’t be surprised that I can’t ask for anything without thinking of myself as an awful person, so I don’t ask. Probably why I’m an impulsive book-buyer, too–I’d rather get it myself. And boy, hasn’t that caused me problems (hee-hee).

I want to volunteer, teach, write and paint. And if I want to do those things all the time, I’m going to have to learn how to make money from them. So, I’m gonna have to freaking get over it and learn how to be a seller (anybody out there know some good resources I could borrow/read/watch?). That way I can pay myself without screwing myself and the government when they come for their due.

Aw crap, guess I’m gonna have to stick with honesty after all. Does anybody actually capitalize on that anymore? Maybe I can…because I’m an awful liar.