(edited at 11:15 when discovered some earlier p.o.v. edits didn’t take–sorry for the confusion)

I’m determined not to talk about the “E” word today. At this point, its like a boil that needs lancing so we can start the healing process–or at least consult a better national heath care professional instead of a shaky YouTube video…. Okay, the analogy went a bit flat, but seriously, plenty of others online are more in tune to the “P” word than me, and there’s not much else I can say beyond three of my previous posts: this one, that one, and the newest one.

I was debating what to write about this morning, as the past few days have had me held up by last minute schedule changes, coursework, and the dreaded “E” that I’ve tried to get away from on the t.v. Amazingly, the answer just roared past me, vrooming out of the parking lot in front of me like a bat out of hell. I’d been thinking this question over for a long time, but the noise pollution always brings it up and makes me feel like those curmudgeons on suburban sitcoms. 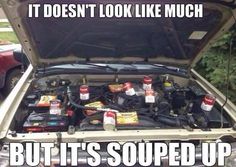 I used to be at the coffee shop a lot earlier on the weekdays. Just about every morning near 5 a.m., I would sip my coffee at the window, waiting for my food to come up, and see the traffic light on the feeder about 40 yards from me. The light turns green, and you see this souped up pickup truck just roar off, screeching tires and the big heavy engine sound and the pistons just thup-thup-thupthupthupthup-ing along super fast until it turns high pitched and zooms past the windows, probably 15 yards in front of me and off.

Two questions popped into my mind every single time. The first one is, who the hell are they trying to impress? I always have to wonder about this, if it’s bad driving or an excess of machismo that needs an outlet, or somebody doesn’t know how to handle their super huge engine on that vehicle. I doubt I’ll ever get a good answer to that question.

And I’m not talking about people challenging others to a race. Seriously, I’ll see them be the only ones at the light, or with a smaller car next to them that couldn’t possibly race ’em if that’s what they’re looking for. Maybe they’ve watched The Fast and the Furious too many times and are imagining themselves racing against one of the guys. Damned if I know, but seriously, they’re on city streets in one of the busiest intersections around, knock it the hell off already. Nobody is impressed that I can see, but I admit being impressed when a cop pulls in behind them all of a sudden with their lights flashing because of their stupidity. 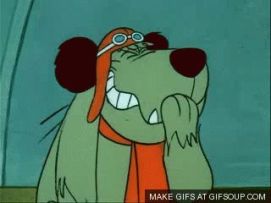 My reaction? Most likely…but with coffee. Must have the coffee.

The second question I had was will I be here when one of their engines gives out a loud crack, has to pull over and stop, the hood belching steam or smoke? Does it make me a bad person to wish I could see that one of these days? That I could look out that window, see the guy take off from the stoplight too fast and just hear a “crack!” and then thud-thud-thud-thud-thud until the vehicle shudders to a stop? The driver would come out of the cab, look in confusion at his poor vehicle, and get all pissed off?

Its a common fantasy of mine, I admit, and while the bunghole is cursing a blue streak at what’s happened to his “baby,” the noise has died down abruptly and all the people in these hotels and motels don’t have to get woken up by his machismo play.

You could call it just a pet peeve, but seriously, 5 a.m. is too damned early  for their nonsense. People need to sleep, and people sharing the road on their way to work (probably not started or done with their first cup of coffee) don’t need to nearly drop it on their pants because this machismo nut goes roaring past.

I love how these memes speak for me. ‘Nuff said.

I would love to ask, when nobody’s there to watch these guys, or it’s super-early in the a.m., who are they trying to impress in these big-engine vehicles at night or in the morning? I wonder if they even know sometimes…but I won’t feel sympathy if their over-hyped engine blows on ’em and they’ve gotta pay out the nose for it. Why would a guy treat his “baby “so badly?

Some relationships I’ll never understand, whether they’re stereotypical gun lovers and their guns; some Hollywood couples and the tabloids; and guys and their souped-up trucks. I love my little car, and do my best to treat him right…after all, I don’t have the ability, let alone the luxury of buying another if I become a dumbass and get into an accident, nor would I want to.

This question goes into my file of “scratch my head and shrug,” because I just can’t get it.